Are they or aren't they a couple? That's a question Bollywood actor Shahid Kapur steered clear of, even as he praised his 'Kaminey' co-star Priyanka Chopra to the skies saying she is at her 'career's best right now'.


'I always knew Priyanka is a 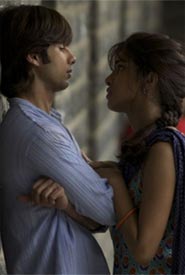 Featured Video
very good actress and after working on 'Kaminey' with her, I realised that she has given one of the most splendid performances of her career. I think Priyanka is at her career's best right now,' Shahid told reporters here Sunday evening.


'Apart from that she is a team player and it's so great she did this film despite knowing that the hero has a double role. She is a self-assured actor and very confident. She knows whatever she does she'll give her best and she'll be noticed and appreciated by the audience,' he added.


Reminiscing on his camaraderie with the beauty queen-turned-actress while filming the movie, he said: 'It was amazing and I had a lot of fun working with her. We started our careers almost at the same time (2003).'


The 28-year-old actor was in the capital to be a part of BIG 92.7 FM's 'Dilli Ka Kaminaapan Quotient' contest and promote his film 'Kaminey' at the radio station. The contest was won by 15 listeners who had to prove that they are the biggest 'kamina' of the city.


Releasing Friday, 'Kaminey' has been produced and distributed by UTV Motion Pictures and written-directed by Vishal Bhardwaj. Writer-turned-director Amol Gupte makes his onscreen debut in the film.


Shahid is on a chain of promotion visits and has been noticed marketing the movie alone, without the leading lady.


He explained: 'Me and Priyanka are doing a lot of promotions together and also individually. We are together promoting (the film) and we recently did a press conference in Bangalore.'


'Kaminey' has had its share of controversies too considering a reported on-off relationship between Shahid and Priyanka.


Shahid kept mum on this but insisted that such rumours added to 'pressure' in a celebrity's life and career.


'People say that any kind of promotion is good promotion but I don't personally subscribe to that... The rumours add pressure. It's difficult all the time dealing with all the speculations about your personal life but I guess as an actor it becomes a part of your job... its an occupational hazard. But it's not a great feeling... you have to learn to deal with it,' he said.


'It's ok to be a bit inquisitive about anything (from the media's side) but it's also important to have a little privacy of your own (for actors),' he added.