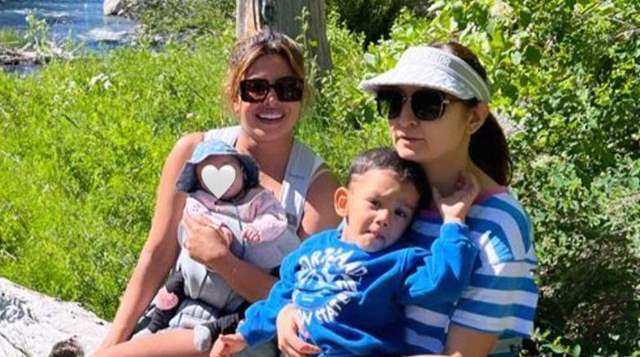 Bollywood actress Priyanka Chopra makes sure to keep her fans updated about her life on her social media. She often treats her fans with amazing pictures of herself and her family as well. The actress now treated her fans with an adorable picture from her recent outing with daughter Malti Marie Chopra Jonas.

PeeCee was seen hugging her daughter while posing with a friend during a trip to the woods.

The Mary Kom actress refrained from revealing Malti’s face and had captioned the picture,

“22 years and counting.. and now with our babies.. love you @tam2cul #bestfriends #Godson #friendslikefamily.”

Priyanka's outfit was perfect for the picturesque wonderland in the backdrops as Marie lay on her bosom in the baby carrier she was wearing. She was wearing a pair of jeans shorts and a sleeveless blouse. The desi girl completed her look with a pair of boots which were perfect for the woods. The actress was accompanied by an old friend Tamanna Dutt, whom the actress referred to as her family in the hashtags she used in her caption.

On the work front, Priyanka will be soon seen in ‘Citadel’, a web series backed by the Russo brothers. Apart from this she also has a Bollywood film ‘Jee Le Zaraa’ co-starring Katrina Kaif and Alia Bhatt.

+ 8
2 months ago sorry but what is she hiding the baby’s face? superstition?