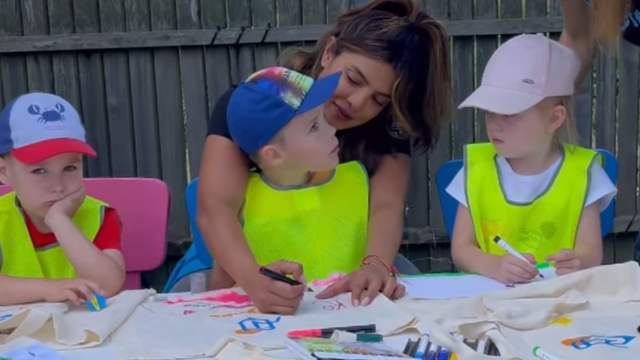 The UNICEF ambassador and Bollywood celebrity Priyanka Chopra travelled to Poland to visit the refugees who were compelled to evacuate Ukraine due to the Russian aggression. The actress shared on social media her encounter with the women and children who had to abandon their homes, where she has been posting touchy images and videos from her visit to the rehabilitation camps.

"An aspect that is not often discussed but is very prevalent in a time of crisis is the psychological impact on these refugees. I met with so many women and children who are trying to cope with the horrors they have witnessed in this war. @unicef responded in Poland and in the region by ensuring that teams of psychologists are available to help mothers and children at the Blue Dot centres, the Child Development centres, the Education Hubs and other touch points."

She further continued while also sharing photos of herself enjoying a couple of games with the kids.

"One of the most effective tools in helping children regain a sense of normalcy is playful interaction. It sounds so simple, but through play, children can find safety and respite, while also being able to explore and process what is happening in their lives. When children are driven from their homes by war, conflict, or displacement of any kind, access to nurturing relationships with parents, caregivers, and peers are critical buffers to the effects of violence, distress, and other adverse experiences."

Along with playing activities outside with the children, Priyanka also sat down with them for an art lesson and wrote,

"The kids I met on this mission love working with art. Coffee beans, salts and regular household items are used for art therapy and sensitivity therapy. When they work with different materials, as well as paints and colours, the therapists are able to understand their emotions. In the beginning, for example, the children would draw with very dark colours, and over time the colours got brighter."

The actress and goodwill ambassador asked for action to be taken to help the displaced people from Ukraine. Priyanka herself became a mother in January this year, via surrogacy. She welcomed daughter Malti Marie Chopra Jonas along with her husband Nick Jonas.

On the work front, Priyanka Chopra will be soon seen in Amazon Prime Video’s original Citadel, which has been created by Russo Brothers.