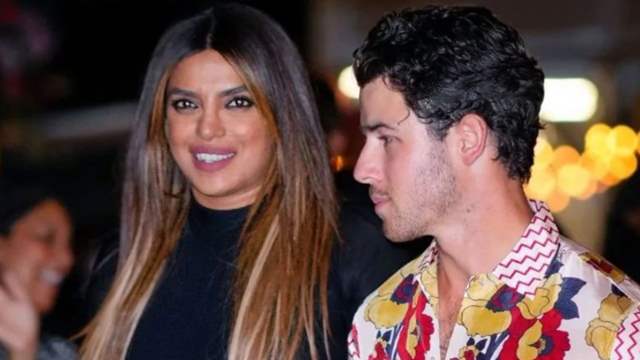 Actress Priyanka Chopra and Nick Jonas are one of the most loved couples globally. The duo's public appearance is a treat to their fans everytime as they always dish out major couple goals. Priyanka Chopra was spotted leaving her restaurant in the city for a dinner date with her husband, Nick Jonas, while she is now in New York.

Pictures of the couple walking hand-in-hand while being photographed by paparazzi outside were posted by a fan account on Instagram.

Priyanka wowed everyone as she stunned in a black dress, a matching black purse, and heels that complemented her overall look. Nick, on the other hand, looked dapper in a printed shirt and blue pants. They were seen holding hands as they greeted the shutterbugs before going inside the restaurant.

As soon as their pictures went online fans went gaga over their cute hand-in-hand walk and praised the couple in all ways possible.

Earlier, Priyanka had shared a short video of herself on her Instagram Stories where she was seen hopping into her car. She captioned it, ‘Enjoying every minute of New York’.

Priyanka recently travelled to New York to address the United Nations General Assembly. For her trip, she has been accompanied by Nick and their daughter Malti Marie Chopra Jonas.

On the work front, Priyanka is a part of Farhan Akhtar’s ‘Jee Le Zaraa’ with Katrina Kaif and Alia Bhatt. She also has a web series, ‘Citadel’ in her kitty.