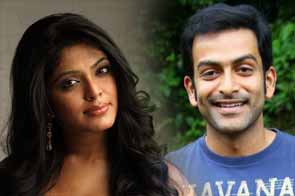 While Prithviraj won the award for his performances in "Celluloid" and "Ayalum Njanum Thammil", Rima got the best actress award for her performance in the film "22 Female Kottayam" and "Nidra".

Directed by Kamal, "Celluloid", based on the life of J.C. Daniel, the pioneer of Malayalam cinema, was also adjudged the best film.

"This year the jury had a tough job to perform with 84 films to be seen, the highest ever entry for awards. They finished their job only today early morning at 5 a.m.," said Kumar.

Expressing his happiness, Prithviraj dedicated the award to the teams of both the films.

"I dedicate this award to all who worked with me in the films. I could do well because of the director, the scriptwriter and all others who worked behind the scenes. It is certainly a good feeling and I am delighted," said Prithviraj.

Incidentally, this is the second time that Prithviraj has won the best actor award, with the first one in 2006 for "Vaasthavam".

Madhu Neelakantan got the best cameraman award for the film "Annayum Rasoolum". Anjali Menon got the award for her script in the film "Manjadikuru", which she had also directed.

M. Jayachandran won the award for best music director for "Celluloid". This is the sixth time he has got the coveted honour.

The jury was chaired by yesteryear director I.V. Sasi along with popular yesteryear actress Surekha and director Sibi Malayil.

Akshay Kumar-starrer Prithviraj sets confirmed to be Destroyed before ...

Eva Green Slams Back at Allegations That She Killed The ...
5 hours ago

Sanjay Dutt Diagnosed With Lung Cancer Stage 3; To Fly To ...
6 hours ago

Identity of Mysterious 'AU' in Rhea Chakraborty's Call ...
7 hours ago