Pritam needs movies like 'Race', which are fast paced and have exciting and thrilling elements, to prove his credibility. Hence, the album of 'Race' isn't all that disappointing. He creates a soundtrack that would keep the masses glued for a short while, at least.

'Dekho nashe mein' has bankable singers like Sunidhi Chauhan, Shaan and KK making you feel that the song is surely going to hit the top. The song is not disappointing, but it isn't very exciting either. Pritam's music for the track sounds like it has been heard before and though but it wouldn't have a long shelf life.

Sunidhi teams with Apache Indian and Taz of Stereo Nation fame for 'Mujh pe to jadoo'. While the music and the tempo are catchy, the singers don't do a bad job either. The entire feel you get is of a racy and captivating piece of music that is sure to click.

'Pehli nazar mein' is a song to look forward to and the reason is Atif Aslam. The combination of Atif's vocals, soft strumming of the guitar and Sameer's poetic lyrics makes for good music. The song is the highlight of the movie. It comes in two remix versions as well.

An out-and-out dance number comes in the form of 'Race is on my mind', rendered by Neeraj and Sunidhi. The pace of the track is fast, beats are tantalising and vocals magnetic. There's a lot happening in this track, which makes it a crowd puller.

'Race sanson ki' is a sure winner. Already climbing the success chart, the song is interesting as far as its vocals and music are concerned. It has the power to pull one to its music and makes one break into a jig as soon as you hear it.

'Zara zara touch me' has oodles of seduction and sensuality thrown into it. Monali plays the part of a singer very well. While the music gets monotonous after a while, Monali's rendition probably saves the day. Otherwise, it tends to be an average piece.

'Race sanson ki' is an outright chartbuster. So even if Pritam's album doesn't hit the right notes with the masses, he can get a night's sleep with the thought that at least one of his tracks made it big. 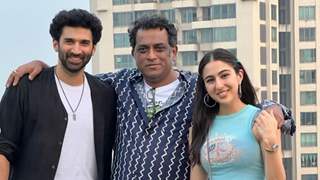