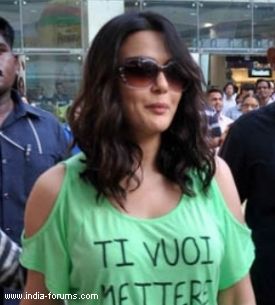 Actress-turned-businesswoman Preity Zinta has rubbished reports suggesting that she is looking to "lease out" her flat in Khar locality here to pay off her debts saying "it's thousand percent untrue".

"Where did this come from? I am amazed at how off-the-mark the report is. It is a thousand percent untrue," said the 39-year-old.

"By the grace of god, I'm most comfortably able to look after myself financially. It is not only untrue it's extremely irritating to read such fabrications about oneself," added the actress of hits like "Dil Chahta Hai" and "Kal Ho Naa Ho".

Preity, co-owner of Kings XI Punjab IPL team, doesn't know whether to be amused or annoyed by the reports.

"There is so much drama in that story. 'Bechari' (poor) Preity. She has to vacate her 'mahal' (palace) and live in a 'jhopdi' (shanty) because the cruel creditors are breaking down her door. I wish people would look for their afternoon soap opera scripts somewhere else. There is no such drama happening in my life," she said.

To her embarrassment, Preity's friends from the film industry have been making discreet inquiries about her financial status.

"I am not going bankrupt, guys. If anything, I see a bankruptcy of another kind in desperate news like reports like these," said Preity.