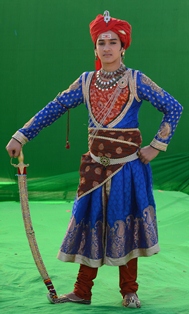 Khan who plays the young Pratap in Sony Entertainment Television's popular epic drama Bharat Ka Veer Putra - Maharana Pratap, is focusing on things other than acting too! Faisal Khan who is leaving no stone unturned to ensure that he emerges as the young Maharana Pratap proficiently is now focusing heavily on his fitness regime as well.

Faisal himself revealed that he is an ardent admirer of Bollywood superstar Hrithik Roshan and follows his commandments totally! And just the way Hrithik gives importance to good health and fitness, on screen Pratap is following his footsteps too.

So much so that, whenever Faisal gets time between shoots, he heads to the gym. That's not all Faisal has bought a bicycle for himself and keeps riding it all the time on the set. Now that's what we call sheer dedication!

maaneetfans 6 years ago You are not only Amazing Dancer but an excellent Actor too... God Bless You :)

.S.A. 6 years ago All the best Faisal Khan

Never thought I would be dancing, I was preparing to be an ...
23 minutes ago