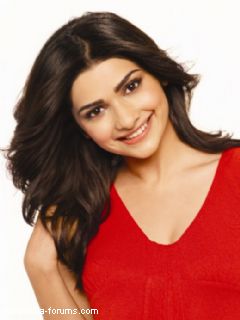 Prachi will feature in the "Awari" track, which will be shot in Mumbai later this week, with a surprise actor whose identity is being kept under wraps.

The track has been composed and rendered by the Pakistani band, 'Soch', who make their Bollywood debut with "Ek Villain". In the past, Suri has introduced Atif Aslam and Mustafa Zahid from Lahore, to the world of Bollywood.

During a recent visit to the Balaji office, Mohit bumped into Prachi, who expressed a keen desire to work with him.

Said a source, "Prachi has been a huge fan of Mohit's hits and was overwhelmed when he instantly asked her to make an appearance in a track. Music has always been a major highlight of his films."

"'Awari'' is not a quintessential item number, as Mohit does not subscribe to that philosophy. Mohit was not keen to go the typical item girl path and wanted a tender, vulnerable face with strong acting abilities, and Prachi fit the bill.

The rock-style bar track laden with emotion is, in fact, organic to a pivotal sequence in the film's second half. Prachi fell in love with the track on the first hearing and the plan is to style her in a never-seen-before avatar.

Going by Jacqueline and Shraddha's make-overs in his recent films, Mohit sure has a good eye for women! And Prachi is the next!
0 Likes

Prachi Tehlan & Rohit Saroha to get Married today; Check out their ...