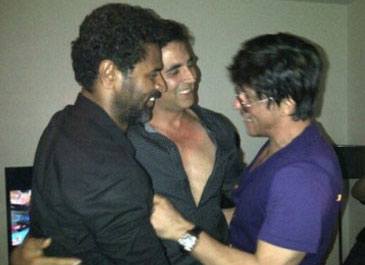 As Akshay Kumar and Shah Rukh Khan partied the night away at Prabhu Deva's home in Chennai after Kolkata Knight Riders' (KKR) title win in the Indian Premier League (IPL), it was Prabhu Deva's two young sons who were missing from the party.

They were obediently asleep in one corner of the house as the celebrity revellers partied Sunday night.

"How could they join us? They're too young to party with us. They don't know who Shah Rukh Khan and Akshay Kumar are. They don't know who the invitees were. If they did, they might have revolted against my decision that they sleep and insisted on joining us," said the actor-filmmaker.

Since there is no lady in Prabhu Deva's house, as he is divorced and recently even his girlfriend, actress Nayanthara split from him, all the party's arrangements were made by his friends.

He is also busy with the promotions of his directorial "Rowdy Rathore".

"I've been running around for the release of 'Rowdy Rathore'. Thankfully, I've good friends who took care of all the party details. We felt we were part of history. Shah Rukh's victory in the IPL was celebrated in my house. I feel blessed," Prabhu Deva said.

Meanwhile, the buzz in tinsel town is growing stronger that Akshay and Shah Rukh are inching towards a movie partnership. They've been seen bonding together recently on more occasions than one. Recently, they were seen bonding at an IPL match in Pune as well.

And then Sunday night, they partied together.

The wonder-struck host still can't get over it.

"It was historic. I had thrown a pre-release party for my 'Rowdy Rathore' team. Akshay and Sonakshi (Sinha) had flown down to Chennai by a chartered plane. How were we to know that Shah Rukh's grand historic win would happen and he would decide spontaneously join us when we invited him, just like that," said Prabhu Deva.

He says Shah Rukh was at the party for 45 minutes.

"He was so full of energy. He chatted, danced, made all of us feel good," he added.

Other guests at the party were Riteish Deshmukh and wife Genelia D'Souza, Rana Daggubati and director Shankar.