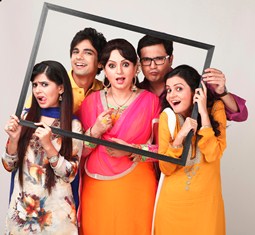 New Year brings new tidings, so does Big Magic with its popular show Naadaaniyaan - Teen Nadaanon Ki Kahaani  In the new seasonal format, the show will be introducing a new character Meghna, which will be played by popular television actress Nikunj Malik. Irritatingly perfect, Meghna's presence is a blow from the past for the nadaan family.

With a whole lot of comical errors, cloudburst of confusion and rib-tickling situations, this entry is sure to create a web of madness starting this Wednesday, December 31st at 8:00 PM on Big Magic!

Tarawanti's friend Sarita lands herself in the Verma family, while looking for an accommodation for her daughter Meghna. An overwhelmed Tarawanti welcomes her aboard, which displeases Chandu.

Throughout her stay Chandu is tormented with snide comments which irritate her to the core, while Tarawanti chooses to overlook them in a bid to pick up her friendship's broken pieces.  Tarawanti has a conniving master plan to better her relationship with her best friend. Will she be successful in her plan? What is the history of Meghna that has left her entry stunned?

Uff! Yeh Nadaniyaan revolves around the Verma family whose conversations and situations promise to keep viewers in splits. A righteous mother, self-proclaimed writer, a ditsy wife clumsy younger brother and two conniving twins; each with their own unique perspective of life constantly land each other in amusing situations with plenty of misunderstandings, crazy pranks and comic characters. Full of fun and masti, Uff! Yeh Nadaniyaan airs at 8pm, Monday - Friday on Big Magic!