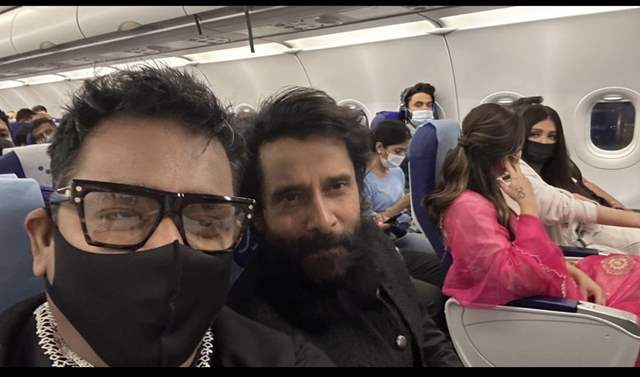 Mani Ratnam's historic drama and magnum opus, Ponniyin Selvan, will have a lavish theatrical release on 30th September. The historical drama which commanded a massive budget, will be coming out in 2 parts.

AR Rahman posted a selfie from the airplane with Ponniyin Selvan star Chiyaan Vikram as the group flew to Mumbai for the film's major promotional event.

“Guess who's travelling with me ...Enroute to #mumbai from #Hyderabad ...PS 1 promotions!”, Rahman captioned the lovely selfie of the PS 1 cast.

Aishwarya Rai Bachchan, Trisha Krishnan, and Ponniyin Selvan's main ladies can all be seen in Rahman's picture, which is fascinating. The stunning ladies, who play bitter rivals in the Mani Ratnam film, are seen chatting while in the sky.

For the uninitiated, Trisha Krishnan had disclosed that despite director Mani Ratnam's orders to avoid each other, she bonded with Aishwarya Rai Bachchan from the very first day of filming. They "notably" got along on set and had a lengthy conversation, the actress claims. Finally, the film's director Mani Ratnam stepped in out of concerns that their affinity may affect the sequences.

Aishwarya Rai Bachchan will be seen portraying the role of Nandini, the female lead of Ponniyin Selvan. Trisha Krishnan will be featured as princess Kundavai Devi. Jayam Ravi plays Aditya and Kundavai’s younger brother Arunmozhi Varman. Karthi essays the role of Aditya and Arunmozhi’s friend and Kundavai’s love interest, Vallavaraiyan Vanthiyathevan. The second installment of Ponniyin Selvan is slated to hit the big screens in mid 2023.