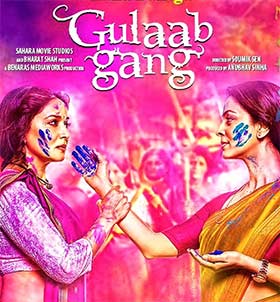 Activist Sampat Pal Wednesday moved the Delhi High Court for blocking the release of forthcoming Hindi movie "Gulaab Gang", which is reportedly based on her life.

The film, starring Madhuri Dixit and Juhi Chawla as leads, is set for release March 7.

Sampat Pal moved the high court seeking a restraining order on the release of "Gulaab Gang", saying the filmmakers did not take her permission before making the movie.

She also sought financial compensation, saying there are certain scenes in movie which will effect her reputation.

Justice Sanjeev Sachdeva, hearing the plea, questioned Pal for the delay in filing the plea.

"Why you approached the court last minute when movie is going to release? Why didn't you come earlier?" asked court, while passing over the case to hear it later in the day and asking Pal's counsel to show judgments related to the case.

The movie, slated for release Friday, is directed by debutant Soumik Sen and produced by Anubhav Sinha.