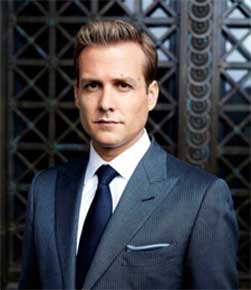 Actor Gabriel Macht, popular for essaying Harvey Specter in "Suits", says the show has been a learning experience for him about life.

"Playing Harvey taught me a lot of things. What I've learned from him is that we can all have self-doubt and be really insecure, but if we can just push through that, our persistence may overcome some failure. I find that that's inspiring from him," Macht said in a statement.

"Suits" tells the story of Mike Ross, a brilliant young college dropout, who slips into a job interview with one of New York City's best legal closers, Harvey Specter.

Tired of cookie-cutter law school grads, Harvey takes a gamble by hiring Mike on the spot after he recognises his raw talent and photographic memory. Mike and Harvey are a winning team and have a great run together but by the end of season three, the past has caught up with them and season four begins with them squaring off against each other.

The fourth season of the show is set to go on air on Comedy Central India Monday, and Macht feels it "brings in a different side of Harvey - the relationship Harvey!"

"He's a committed man, a man in love with his own subordinate, which is again a matter of conflict. Harvey's usual character is being hard on people, straightforward and quick to judge, but his new side brings in a softer side where he's trying to be more understanding, sensitive and open, due to his relationship.

"There's also a strain on Harvey's relationship with Mike."

In the three seasons that it has aired, the show has developed a loyal audience with people warming up to Screen Actors Guild Awards Nominee Mike Ross and showering love & adulation on Harvey Specter. It is not without reason that it is called the biggest show on English television! Be ready to remain on the edge of your seat.