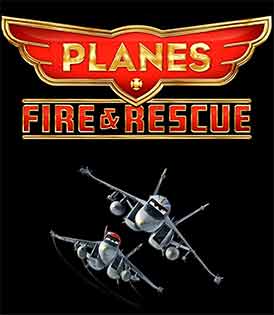 Sequels carry the baggage of their predecessors and producers, and more often than not they are hardly appreciated.

Disney's latest animated film, "Planes: Fire and Rescue", dedicated to the fire-fighters who lost their lives saving others, suffers from this baggage syndrome.

Unlike its predecessor, the August 2013 released "Planes", which was an underdog story complete with a bit of romance, plucky sidekicks, arrogant bad guys and dumb henchmen, "Fire and Rescue" is a hero's journey that is narrated in a pretty straightforward, dramatic manner sans the spirited elements of its predecessor or a fiercely motivational plot.

In this edition, the star racing plane, crop duster Dusty Crophopper (voice of Dane Cook) is all set to participate in the next international racing circuit, when on a routine test fight, he experiences some setback. On close inspection by his mechanic friend, Dottie (voice of Teri Hatcher), he is told that his gear box is malfunctioning and that he should not cross his speed-limits or else he would be grounded for good.

Realizing that his racing career is at stake, this news comes as a dampener to Dusty, who, in his state of depression, causes a terrible fire at the air-field.

Now, due to the lack of the fire-fighting facilities at the air-field, the authorities threaten to withdraw its operational license.

Meanwhile, as his moral responsibility, Dusty realizes that at least he can train to be a fire-fighter and help the aging fire truck Mayday (voice of Holbrook) keep the field from closing. So he flies off to Piston Peak with Blade Ranger (voice of Ed Harris) and Dipper (voice of Julie Bowen) to train with the team, suppressing fires in a National Park, where he learns to be a S.E.A.T., Single Engine Aerial Tanker, a fire-fighting plane. He looks at it as his second chance career alternate to racing.

Needless to say, Dusty's moment of glory comes when he is tasked to spray the pink fire retardant in order to protect the beautiful and historic Piston Peak National Park during wildfire season.

Technically, scriptwriter-director Bob Gannaway has done a commendable job in mounting his debut feature. The film is pleasing to the eye. The animation is detailed and nearly flawless. The flight sequences with the panoramic scenic frames are marvelous. The flaming forest, the gurgling river and the anthropomorphized characters are likeable as well as believable. The sound design, which includes the background score and songs, enliven the viewing experience.

The voices of the star cast blindingly synchronize with the characters but unfortunately the dialogues and humour in the film will evoke a mixed reaction. The humour is mildly 'techno-centric'. While the adults would lap up the one-liners with a chuckle, the kids would find it difficult to understand.

Overall, "Planes: Fire and Rescue", with its 3D effect is a mediocre fare that you'd want to watch on a rainy day if you have nothing better to do.

Rhea Chakraborty Retracts her Statements; Says She was FORCED to Make ...