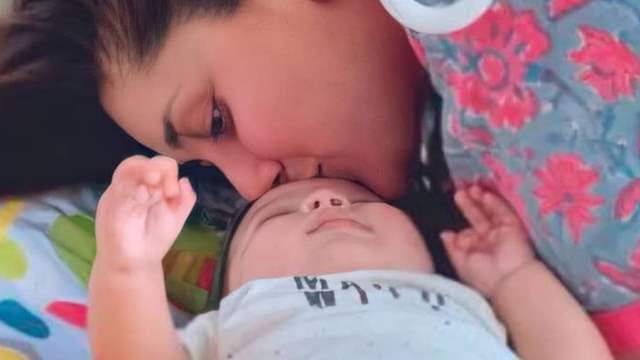 Kareena Kapoor Khan and Saif Ali Khan welcomed their second baby boy after Taimur Ali Khan on February 23, 2021. While fans have been waiting get a glimpse of the newborn baby, Bebo has been giving us a sneak peek of the little Pataudi.

Rumours had it that the star couple has named their second son Jeh, and are reportedly even considering the name Mansoor after the name of Saif's father Mansoor Ali Khan Pataudi.

Kareena, who recently launched her pregnancy bible has shared a picture with baby boy Jeh Ali Khan in her book and the same is going viral on the Internet.

In the picture, Bebo can be seen kissing her newborn son as he rests in a colourful crib. Check out the picture below:

In other news, A Christian group has taken objection to the title of a book written by actress Kareena Kapoor and filed a police complaint in Beed city of Maharashtra against her and two others on Wednesday, accusing them of hurting the religious sentiments of the community, an official said.