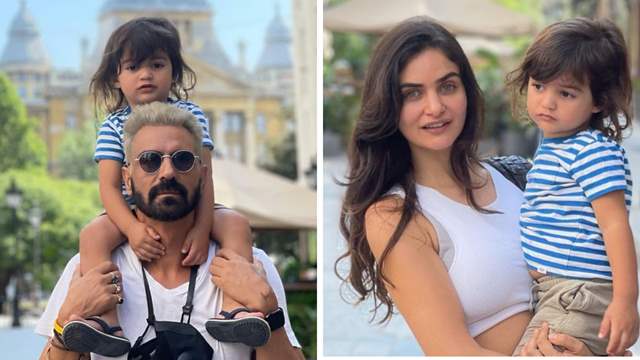 Ahead of his Dhaakad shooting, Arjun is spending some quality time with ladylove Gabriella Demetriades and their son Arik. On Wednesday, the actor shared some adorable pictures as the family vacations in Budapest.

Sharing the pictures, Arjun wrote on Instagram: "Some quality time with the family. Before i get to work. #beautiful #budapest #gratitude #dhaakad."

In one of the pictures, little Arik can be seen sitting on daddy Arjun’s shoulders and in another, he flashes a super cute smile as mumma Gabriella carries him around on the streets of Budapest.

Arjun and Gabriella had welcomed their first baby boy Arik in July 2019. Arjun also has two grown up daughters: Mahikaa and Myra with with ex-wife Mehr Jesia.

Arjun Rampal and Mehr Jesia ended their 21 years of marriage last year in November. The couple filed for divorce after releasing a statement announcing their separation in May. The duo was granted divorce by the Family Court and the custody of the couple’s two daughters was given to Mehr.

On the work front, Arjun Rampal will be next seen as the antagonist in a spy thriller film titled Dhaakad, starring Kangana Ranaut in the lead role.