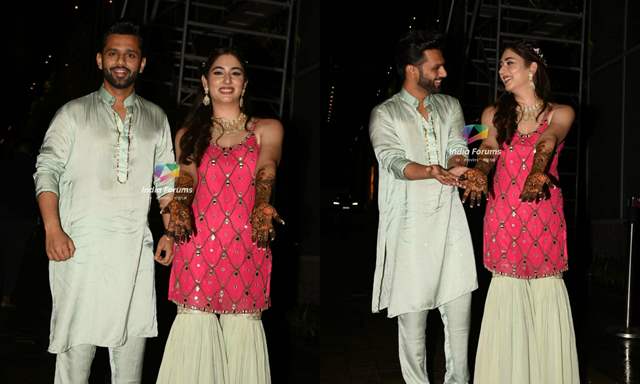 Rahul Vaidya and Disha Parmar are gearing up for their big day on July 16, 2021. The pre-wedding festivities have begun for the two and photos and videos have been all over social media. Today, the couple celebrated their Mehendi function, and also present at the occasion was Bigg Boss 14 co-contestant, Arshi Khan. Disha and Rahul seem to be having a fun time together and in fact, they made for an adorable couple while Disha flaunted her mehndi.

Rahul opted for a gree kurta-pajama and looked as suave as ever. Meanwhile, Disha decided to opt for a mint green sharara paired with a pink kurta and some subtle jewelry along. She had Mehendi up until her elbows and made for one of the prettiest to-be brides during the functions. Together, they definitely have fans gushing over them after all.

It was only a couple of days ago that the two announced their wedding and ever since, that's all there is to talk about after all. Right from the wedding shopping to the bachelorette party, and everything else that there is, the two have been in the news and how.

Rahul had proposed to Disha on national television during his time on the show and interestingly, he also received an answer on TV as Disha visited the house in the valentine's special episode. The two also celebrated Gudi Padwa together and took a vacation before Rahul headed to Khatron Ke Khiladi 11.