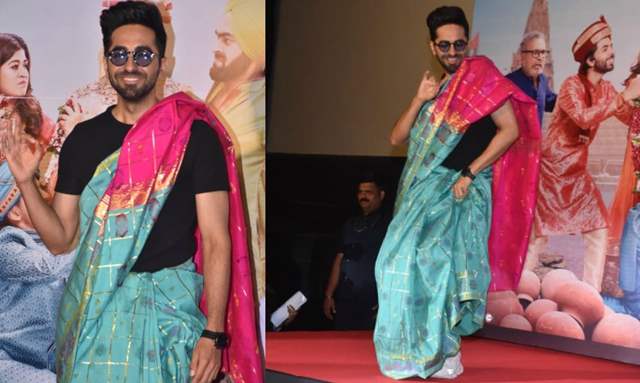 Ayushmann Khurrana is one of the most versatile actors Bollywood has; who doesn’t shy away from portraying characters who are hatke. From his debut movie Vicky Donor, he has always made it his agenda to work on movies that give out social messages and connect with the audience on a personal level. He has always thanked his street-play days for his knack of picking out such stories.

The 34-year-old actor, who his currently basking in his achievement for receiving the best actor award in National Film Awards 2019, was recently snapped at the trailer launch of his upcoming movie Dream Girl. Along with Ayushmann, producer Ekta Kapoor, Nushrat Bharucha, first-time director Raaj Shaandilyaa, Manjot Singh and Abhishek Banerjee were also present at the trailer launch.

Dream Girl is a story of a man who makes a living by playing not only female mythological characters like Radha and Sita in plays, but also impersonates a seductive female named Pooja who talks to the customers and makes them fall in love with his fictitious character while working in a call centre. The callers include Vijay Raaz – a policeman, Abhishek Banerjee – a young man and Nidhi Bisht – a woman.

While all the actors were dressed in elegant clothing Ayushmann, whose character portrays a male and female both on-screen, sported two outfits for the same event. The actor entered the event with a green and pink saree draped over his black t-shirt, jeans and a white pair of sneakers. This hatke costume of his was received with a lot of hoots and cheers from the public.

After interacting with the media for a few minutes, the versatile actor had a change of costume and returned to the event sporting a black jacket.

(Check out the pictures here: Ayushmann Khurrana rocks the trailer launch of Dream Girl in a saree!)

Yeh Hai Chahatein shoot called off for the first time post ...
18 seconds ago

ZEE5 drops the teaser of it's upcoming web series 'Bhanwar'! ...
12 minutes ago

Naagin 5: Dheeraj Dhoopar to don a similar look of Ranveer ...
57 minutes ago

Anushka Sharma has an epic response on being asked if she ...
59 minutes ago