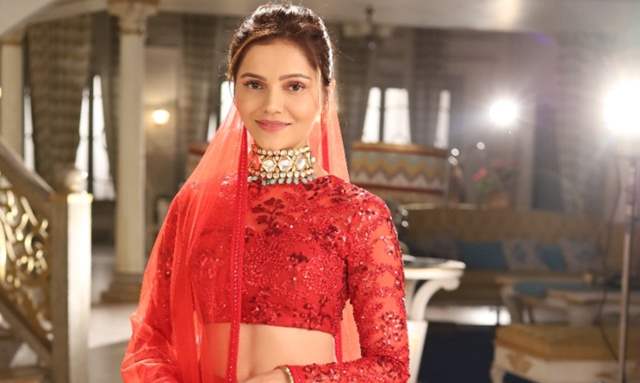 Bigg Boss 14 winner Rubina Dilaik has been keeping busy with her show and music videos. Soon after she wrapped up the shoot for the music videos, she returned to Shakti...Astitva Ke Ehsaas Kii. While fans thought it'll only be a very short appearance, they are kicked about her extended stay on the show. While the show has been doing well with the audience, the actress is back in the news.

A photo of the star in a red lehenga has surfaced and it seems to be a new look for the show. Decked up in red along with some subtle makeup, she is seen wearing a choker necklace along with her hair tied into a bun with the dupatta pinned up to it. As usual, she looks beautiful and has fans going gaga over the new look.

Check out the Rubina's photo here:

Meanwhile, her second music video Galat, featuring Paras Chhabra, seems to have broken multiple records and has been garnering a positive response so far. Soon after the release, everyone has been talking about it and it also went on to trend at number #1 on YouTube. Apart from Galat, Rubina's first project post her stint on BB14 was a music video with Abhinav Shukla, Marjaneya. With vocals from Neha Kakkar, that music video also garnered a lot of love from the fans and in fact, went on to gain a lot of attention from fans of the duo.

Meanwhile, there were reports about the actress being approached for Khatron Ke Khiladi, however, reports have it that she is not keen on doing back to back reality shows and wants to explore different things before doing another reality show right after Bigg Boss.