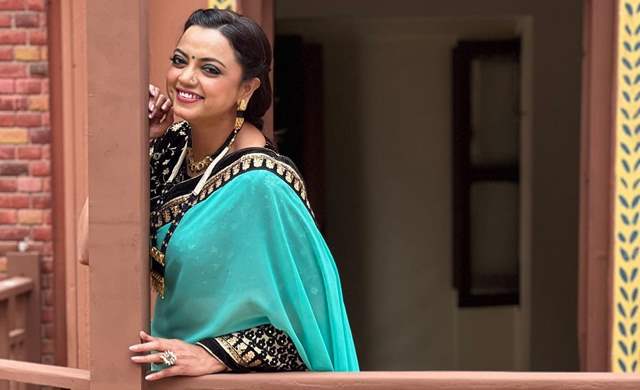 Star Plus show ‘Ghum Hai Kisikey Pyaar Meiin’ is getting a lot of love from the audiences. The current track of the show revolves around Virat coming to know that Sai is alive. Virat is furious on Sai for hiding the same while Sai is also not interested in letting him know about the struggles that she went through all alone while bringing up their daughter Savi.

The show took around eight-years’ leap. Post leap, the show looks freash. A lot of new elements have been added. Few actors’ looks have been changed to justify the leap. India Forums got in touch with Sheetal maulik who plays the character of Sonali Chavan in the show. She plays a character way ahead of her real age. We asked Sheetal about her thoughts on ageing onscreen.

Talking about the same, Sheetal said, “I always believe age is just a number … there is no harm in ageing gracefully… I am happy I could play a school going, play leads , important positive and negative roles and I am sure there is a lot in store for me for the future”.

Sheetal has been in the industry since a long time and we asked her if she feels that the industry has changed as compared to the old times. She said, “There is no one thing that I can point out but many changes have happened over the years. Some for good and few for bad…. Work culture has changed, many new talents have come up, they’re confident enough to face the world and are very independent… but I truly feel it’s not only acting but actors should learn the values and antiques to be a good actor”.

When asked about the upcoming twist in the show, Sheetal said, “The show have stored a lot of twist and turns… the base of the story will be the same but people should expect lots of shocking incidents”.

Are you excited for the upcoming track of the show? Hit the comments section below.

+ 6
2 months ago what a load of generic BS. nobody even knows how many years ka leap it is- anywhere from 5 to 10 years. half the cast is engaged in chamchagiri of few people and no professional/personal integrity. no concern for acting scope either, just come stand as a prop and take a pay cheque. dont they get frustrated at their talents, potential being wasted

2 months ago Why doesn't the writer make Virat agree that he has committed a crime by allowing Patralekha to be the surrogate, snatched the baby and gave it to P, didn't make P sign surrogacy papers, got her bail and got her back to her own house?Why doesn't he say sorry to Sai atleast once and not repeat his mistakes. Why don't the writers show Sai and Virat as a team and expose Patralekha s mistakes. Why does P always have to win?Is there noone in the whole family who supports Sai?Why does Sai have to be alone always? Makers should write a non biased story else we can't enjoy non stop abuse of Sai. it gets boring and monotonous.

2 months ago The next shocking incident is Virakhi having their own baby, Sai still apologizing and running behind Virat. What more your show can do? I still wonder why this crap is getting TRPs. On one hand our Indian film industry's graph is going up with more content related movies and on other hand TV industry is going downhill with these kind of regressive and pathetic shows. Should we blame PH and Channel or aunties who are giving TRPs?

+ 9
2 months ago This bakwaas is still running thats mkre shocking than any other shocking twists. Many of us waiting for only one good twist that this crap goes off air.

+ 3
2 months ago Sheetal give a generic answered cause she doesn't know what's going to happen either. How can she when Vanku doesn't know either.

+ 7
2 months ago Instead of Virat now Patralekha fancies Ninad, her new rival is her once mother-in-law Ashwini.

+ 3
2 months ago from start only this serial has only shocking track...lol...nothing sensible..what more shocking it can go

2 months ago Shocking thing:: Patralekha has kept Mohit's clothes in her suitcase🤭🤭🤭🤭🤭🤫🤫🤫 lolz she likes packing her devar's clothes 🤢🤢🤢