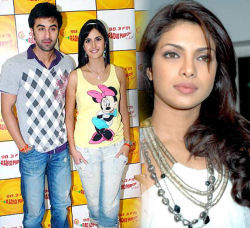 Sounds curious, right? There was one person who knew all along that Ranbir Kapoor and Katrina Kaif were seeing each other. And the person is none other than the Desi Girl Priyanka Chopra. We have heard that Priyanka happened to bump into Katrina when the actress came to meet Ranbir in the US.

Rumor has it that Katrina Kaif frequently flew over to the US to meet Ranbir, where he was shooting for Sajid Nadiadwala's Anjaana Anjaani, co-starring Priyanka Chopra and Zayed Khan.

During her visits to Ranbir, Katrina always made sure that she stayed away from the location of the shoot and that no one spotted her there. Her excuse was that she was in the UK, enjoying holidays with family!

But the reality turned out to be much more interesting , with her taking frequent flights from UK to the US. However, Priyanka spoiled the fun by running into her and the cat was finally out of the bag!

Katrina's PR people have rebuffed the news going as far as calling it 'ridiculous' and 'sheer rubbish'.

Still, it's a safe postulation to make that Ranbir and Katrina had something going, which had anguished their respective beaus Deepika and Salman earlier, even leading Ranbir- Deepika to splitsville.  Whatever is brewing surely began during the shoot of Ajab Prem Ki Ghazab Kahani, continued through Raajneeti and is still making news!

Anurag Basu's next project, where the said duo are speculated to co-star yet again, may further the bonding. But the matter remains complicated with Ranbir-Deepika keeping in constant touch via texts whilst Kat was also intermittently heard to be giving Ranbir the cold shoulder due to inexplicable reasons somehow involving Priyanka!

As for us, the reporting media - things just keep going round and round, in endless circles! Wishing the lovebirds a happy, hopefully lasting future, whoever they are in this case!

Kangana Ranaut Vs Anurag Kashyap: Actress ‘Steps Back’ after ...
31 minutes ago