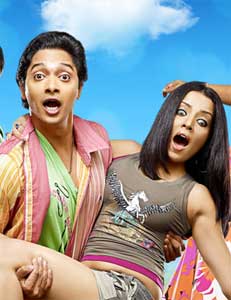 Featured Video
Composer duo Sajid-Wajid's music is usually fast-paced and foot-tapping, evident in their previous albums 'Welcome' and 'Partner'. But 'Paying Guest', a film produced by Subhash Ghai, may fail to please music buffs as it lacks freshness.


The first song is 'Jack and Jill', which starts with an animated voice. The pace of the number, crooned by Shaan and Earl D'Souza, is slow and the track is high on western musical arrangements. But it fails to impress. The major drawback of the song is the lyrics.


The re-mixed version of 'Jack and Jill' is faster and suitable for the dance floor.


This song too has a remix version, which doesn't add any novelty to it.


The title song 'Paying Guest', which is sung by composer-turned-singer Wajid Ali, fails to strike a chord either.


The album has a romantic number 'Ya rabula rabbi', which has Sonu Nigam, Amrita Kak and Earl D'Souza behind the mike. It has nothing extraordinary to offer and doesn't attract the listener's attention. The music is average and so are the lyrics.


On the whole, at a time when composers in Bollywood are experimenting with different sounds and genres, the music of 'Paying Guest' lacks freshness, unlike most Subhash Ghai productions.