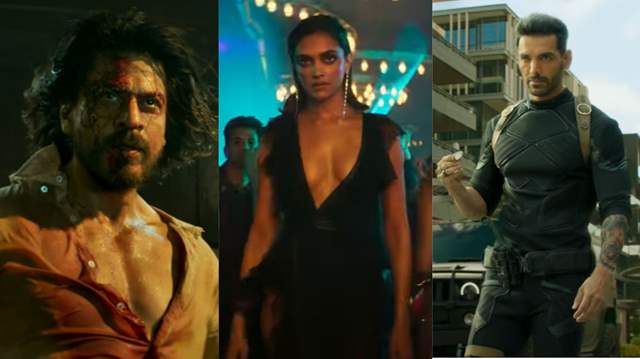 Are you in awe right now? Because we definitely are. The makers of 'Pathaan' have unveiled the much-awaited teaser of the film on Shah Rukh Khan's birthday and it is nothing but stylish and high on action.

Shah Rukh Khan as Pathaan is everything raw, fiery and blazing. The teaser begins with people questioning where is Pathaan ? Is he alive or dead, and then enters SRK exuding his charm and appeal.. saying 'Pathaan zinda hai'.

Shah Rukh's high-octane action sequences, a glimpse of Deepika Padukone, giving out Ana De Armas vibes and the fighting sequences between SRK and John Abraham will take your breath away.

SRK posted the teaser on Instagram and wrote, "Apni kursi ki peti baandh lijiye…#PathaanTeaser OUT NOW! Celebrate #Pathaan with #YRF50 only at a big screen near you on 25th January, 2023. Releasing in Hindi, Tamil and Telugu".

As per reports, Salman Khan will make a cameo in the film and this will be a part of the spy universe project.

The posters of the film had already made fans go gaga and now that the teaser has arrived the excitement level has pumped up to another level. Now all of us will be waiting with bated breaths for this thriller to explode and witness Shah Rukh Khan spread his charm on the big screens after a hiatus of 4 years.

The Siddharth Anand directorial is all set to hit the big screens on 25th January 2023.

+ 2
2 months ago So much hype for this pathetic joke of a movie. It will be a massive flop after release. Poor CGI, horrible acting and most importantly it will have action scenes copied from Hollywood films. Even the Fast & Furious movies look more realistic compared to this dumpster fire.