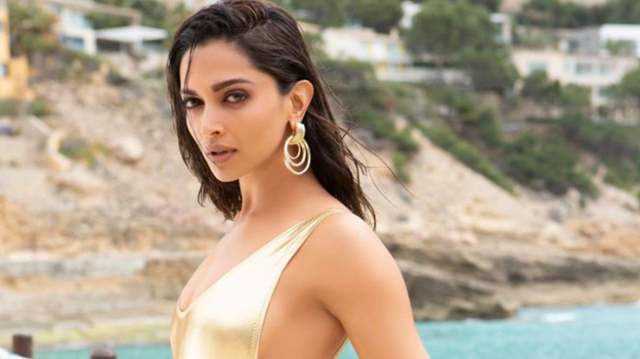 Pathaan is one of the most anticipated movies of 2023. Deepika Padukone, Shah Rukh Khan, and John Abraham will play the key roles in the action thriller. The Hindi, Tamil, and Telugu versions of the movie are scheduled to be released in theatres on January 25, 2023. Fans are anticipating every new detail about the action thriller Pathaan, and now the film's producers have announced that the first song will be released on December 12, 2022. Deepika's admirers are in a state of awe after seeing a fresh still of her that is released before the song's release.

In the picture, Deepika is seen flaunting her perfectly toned body while being decked in a golden metallic monokini. Her tresses are left open with a bold expression. She is seen wearing a matte make-up look with nude brown lip shade and smokey eyes.

Confirming about the song, Siddharth Anand had said,

“The first song of our film is releasing on Monday. It’s called Besharam Rang and it will present two of the biggest superstars of our generation Shah Rukh Khan and Deepika Padukone in their hottest avatar yet."

"For us, this one is the party anthem of the season that people have been waiting for and I’m confident that it will stay a party anthem for many, many years to come. So, I want to tell the fans and audience to patiently wait for the song when it releases on Monday morning! The wait for this one will be worth every second from now!”

This is the fourth time we will see Shah Rukh Khan and Deepika reunite on the screens.