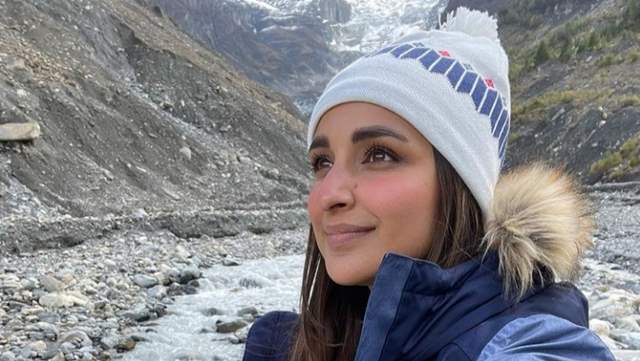 Bollywood actress Parineeti Chopra is currently shooting in Kargil for her next project and braving tough weather.

On Wednesday, the actress shared a photo of herself from Kargil where she is seen sitting by the fireside to soak in some warmth.

Dressed in winter clothes and boots, Parineeti looks ready to face the chilly climate like a true fighter.

Getting some warmth besides a small bonfire, the actress shared the picture on Instagram and wrote,

“On screen, you will watch a summer movie! #ReelvsReal #Freezing #Minus12° (all for the love of films).”

Previously, the actress had shared fun clicks from her shoot in Nepal, wherein she posed against icy mountains.

The actress is shooting for 'Uunchai' helmed by Sooraj Barjatya's and has been updating her fans on social media with several pictures from her schedule.

Announcing her association with the movie, Parineeti had previously shared,

''Thrilled and honoured to be a part of the iconic cinematic universe of Sooraj Barjatya sir. He has defined, and is the torchbearer of India’s family entertainers and I can’t wait to work under his tutelage; alongside this stellar and incredible cast.”

Apart from this, Parineeti Chopra has also signed up to play the lead in 'Animal' alongside Ranbir Kapoor.

Speaking about the film she had told PTI,

“I don't sit and desperately plan that I want to work with this director or that actor. I have never done that in my career. So for me, the opportunity to be a part of ''Animal'' means a lot. It is a huge honour to be a part of a film with Anil Kapoor sir and Ranbir. These are actors I''ve enjoyed watching and respect immensely in personal capacity. For me, working in ''Animal'' will be months of learning school."

Earlier this year, the actor starred in Sandeep Aur Pinky Faraar, in which she shared screen space with Arjun Kapoor.