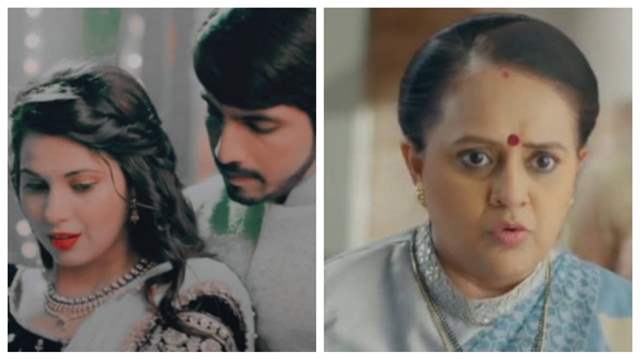 Star Plus show ‘Pandya Store’ is riding high on intense drama. Recently, the show had an intriguing track wherein Shiva was framed in a fake smuggling charge. Janardhan and Kamini had conspired against the family. Shiva was about to get arrested and the Pandya Store was about to get shut but at the nick of the time, Rishita brought the proof of Shiva’s innocence. Because of Rishita’s efforts Shiva and Pandya Store got saved. Post this, the family geared up for Shiva-Raavi and Dev-Rishita’s grand reception.

In the upcoming episode, Shiva keeps on staring at Raavi and get mesmerized by her beauty. Raavi feels awkward and confronts him and asks him if she’s not looking fine. The duo shares beautiful moments together. Later, Shiva tells Raavi that he is feeling uneasy since a couple of days. He is about to confess his liking towards her, but Suman calls them for a ritual. Despite of Mami’s hurting comments, Dhara performs the rituals for Raavi and Rishita.

Kamini and Kalyani make their entry in the Pandya niwas. Suman doesn’t like them visiting but Dhara and Gautam welcomes them. Kalyani gives an expensive jewellery set to Rishita. Kamini takes a dig at Rishita marrying into a poor family who can’t afford the basic expenses. She further gets a heap of gifts for Rishita and taunts the family's financial status further.

In the forthcoming episode, Dev returns the gifts to Kamini and tells them that they are only looking forward to their blessings and not gifts.

+ 3
2 months ago Shiva and Raavi are amazing in PS! KD as Shiva was outstanding in today's episode

+ 2
2 months ago Loved the scenes between Shiva and Raavi in today’s episode. It is a delight to watch Kanwar act on screen and Alice was so cute today.

2 months ago Love Pandya Store and the entire cast