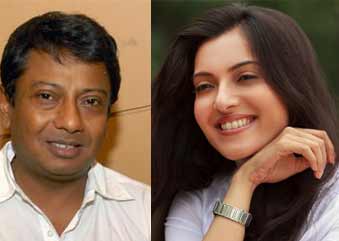 Onir's new Hindi film "Shab" will introduce Bangla superstar Prosenjit's wife Arpita Pal in the female lead. The film will not only transform the traditional Bengali beauty's image into a hip south Delhi socialite, it will also cast her as a woman in love with a younger one.

Arpita, who is considered one of the finest contemporary actresses in Bengal, voluntarily gave up her career to be Prosenjit's wife and to look after their daughter. She is emerging from her self-imposed exile to do the occasional film, like the late Rituparno Ghosh's last released film "Satyanweshi".

Onir says it took all his persuasive powers to get her on board for this project.

"I had actually gone to meet Prosenjit. He had expressed a keenness to work with me. When I went to meet him, Prosenjit's wife walked in," he said.

It was camera-love at first sight for Onir.

"I'm surprised she hasn't been cast in any Hindi film so far. She is absolutely stunning, so stylish and elegant. Arpita has the potential to be the next best thing in Bollywood from Bengal after Sharmila Tagore, Jaya Bhaduri and Bipasha Basu," he added.

After persuading Prosenjit to let his wife work in Bollywood, Onir has now taken on the task of transforming Arpita's image.

"I am giving her a very elitist south Delhi look. I am cutting Arpita's long hair to a chic stylish shorter crop, changing her wardrobe, body language, the works," said Onir.

Arpita plays a woman in love with a younger man.

"I am moving to Delhi for the next six months to explore the milieu and get familiar with it. The Old Delhi, Chandni Chowk, Paharganj area has been done by Dibakar Banerjee, Sudhir Mishra and Ajay Bahl. I'd like to explore the other more upmarket Delhi, South Delhi, in 'Shab'."

Onir has also persuade Sangeeta Bijlani to emerge from her retirement and play a prominent role in "Shab".

Unlike Onir's other films "My Brother Nikhil", "Bas Ek Pal" and "I Am", Shab won't deal with alternate sexuality.

"As a filmmaker, I don't want to limit myself to one specific thought or genre. It is true that my earlier films dealt with alternate sexuality. But there are so many other themes that I wish to explore," he said.

"Shab" is the first script that Onir wrote.

He said: "I am finally making it now. It is set in south Delhi and deals with complex relationships."

While the rest of the cast is yet to be finalised, Onir has finalised Sangeeta for one of the main roles.

"Sangeeta plays a fashion diva who heads a beauty pageant. I saw her at a fashion show and loved the way she carries herself. I asked a common friend (designer) Anita Dongra to introduce us. Sangeeta is just the face and personality I want for the role. I'm sure she'll do a terrific job with the role," added the acclaimed moviemaker.