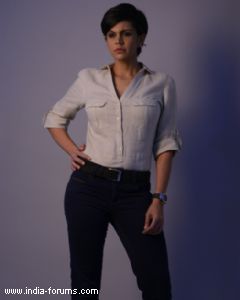 Nineteen years after she made her TV debut in the Doodarshan serial 'Shanti', Mandira Bedi, looking better than ever before, has struck back into the idiot box with her RAW agent act in '24'. She says she is surprised by her character Nikita Rai's popularity.

"There is no getting away from the serial's impact. Everywhere I go, people insist on calling out 'Nikita', just as they used to shout out 'Shanti' 19 years ago when they saw me in public," said Mandira.

"Believe me, I am as bowled over by the serial as any one else. I am confined mostly to one section of the goings-on during shooting, so I haven't even met many of the cast members."

"I don't know how the episodes finally look. So, I watch them from the edge of my seat with my husband Raj (Kaushal) and son Vir, like the rest of the nation. In fact, this weekend I recorded the episodes as I was shooting nights for the serial."

Everyone seems to enjoy "24" to the hilt except maybe her little son who finds "mom" missing during bedtime.

Mandira's voice melts with maternal longing when she says, "For the last five days, we've been shooting nights and my son has to make do without me. He (usually) sleeps with his arms tightly around me. So, while I am sleuthing on the sets as Nikita, I am also wondering how my son is coping without me," Mandira said.

"Of course, my husband is extremely supportive. But so far whenever I was asked what it feels like to balance out a career with my domestic responsibilities, my response was academic. Now I finally know how painful it is a for a mother to be working when her child needs her."

But, no complaints! Mandira is in top shape in every which way right now.

"I think I look and feel far better now than I did when I acted in 'Shanti' 19 years ago," she said.

Mandira has only auditioned for two roles in her entire career.

"One was for 'Shanti' and the other is '24 tele-series'. And they've both proved career-defining," she said.

And yes, the athletic side of Mandira will surface in the coming episodes of "24".

"So far, my gun has been in the holster. Now it'll finally come out in the final episodes when I get to fight in the field. '24' is such a game-changer. I think audiences were somewhere fed up with watching the same Saas-Bahu soaps all the time. I've been part of one of them," said.

"I couldn't seem to shake off the evil woman's image. I was determined to do another fiction serial only when I played the title role in a game-changing serial. Well, I don't play the title role in '24'. But I am pretty much close to the top of the credit lines. And what an experience!"

"People have just taken to the series and to my character. If I tweet about Sachin Tendulkar, they tweet back about '24'."

Mandira Bedi opens up about Adopting daughter Tara and reveals she has ...

Orion 7 years ago She is fab...only show I look forward to watching these days! Evryone is superb...n she is rght...evryone is tired of the saas-bahu rona-dhona dramas...abt time we change! Thnk u Anil Kapoor for coming up with this show!

yessehm 7 years ago Brilliant Show!! Mandira is just fantastic in it as Nikita! Can't imagine anyone else doing the role. She has played it to perfection. 24 is the best show on TV right now. about time Indian shows evolved and moved away from the typical mundane soaps