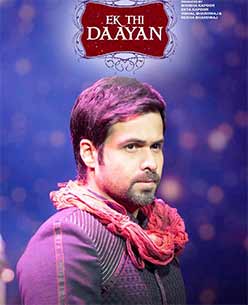 Emraan Hashmi, who is playing the male lead in forthcoming supernatural thriller "Ek Thi Daayan", says a decision on the film's sequel depends upon its box office performance.

The actor, seen in hits such as "Murder" and "Gangster - A Love Story", says they will know about people's reaction to the movie "once it releases".

"Once the film does well, then we will make the sequel," the 34-year-old actor told IANS.

"If it is a great story and it is taken forward in a nice way, then I would like to be a part of it," he added.

In the changing scenario, films with good scripts work at the box office.

"There is a big change, a lot of new films are coming. 'Raaz' worked last year and now hopefully 'Ek Thi Daayan' will work. If you have a good story any film will work," he said.

"It was great shooting a film with an interesting script. I always had a fascination for supernatural films," he said and added that with the film being placed in a "relatable world, with folklore of a witch being played out, it's interesting".