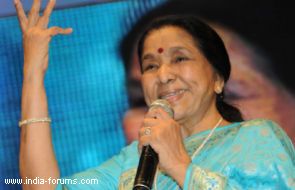 Director Mahesh Kodyal's Hindi film "Mai...", where Asha Bhosle makes her debut as an actress, is releasing Friday. The legendary singer says it was not difficult to make the transition from singing to acting at this stage of her life when she is 80.

"It is a mother's role. I didn't have to act. In fact I think acting is much easier than singing. While acting, you get your emotions broken into several shots before they are conveyed. While singing, all the emotions have to come out in one go in one take. No, I didn't find playing the mother in 'Mai...' too difficult," said Asha.

However, it is a definite 'no' for anymore acting roles for her.

"I think I'm better off singing. My deepest regret is that two people so close to my heart, my daughter Varsha and my friend photographer Gautam Rajadhyaksha won't watch my film. Once a singer, always a singer. Acting is a new adventure. But I've been a singer all my life.

Asha, who has sung a melange of romantic film songs to cabaret to ghazals in her over six decade-long career, says crooning behind the mike elevates her mood.

"Whenever I've sung, I've set my sorrows aside. But when I sit to think I see so many sorrows in my life. Maybe god thinks I'd stop singing if I was allowed to be stress-free. I never relaxed in life," she said.

Having just completed 80, Asha says she likes being a people's person.

"My daughter Varsha (who died tragically in 2012) once asked me why I speak to everyone from my residence's watchman to the guy who does our laundry. I inquire about everyone. That's an old habit. My daughter asked: 'Do you know who you are?' I thought about it. She said: 'You're Asha Bhosle. And you must maintain a distance from people.' I disagree with that.

"Just because I sing, it doesn't mean I am not a human being. I like to see myself as a simple person. I may dress up in public. But at home you'll see me in a simple sari," she said.

She attributes her resilience and staying power to her honesty.

"I am like glass. You can see right through me. I also refuse to cling to negativity. I like to move on. I am blessed because I get so much respect both in India and abroad, even at places like Spain and Portugal.

"No one has ever misbehaved with me in public. I think this world is beautiful. Not that I've forgotten any of the pain that I've gone through. It's there all stored away. I am the soldier who has taken wounds on my chest. I am proud of them. I faced all the adversities. At 80 today, I am happy and peaceful. No regrets. God gave me endurance power and because of Him, I am still standing tall today," she said.