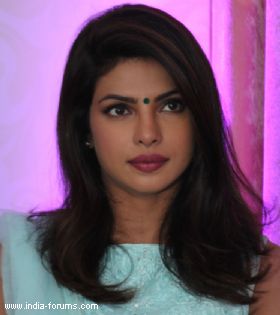 Bollywood actress Priyanka Chopra, who turned 32 Friday, treated her fans with a teaser of her much-awaited movie "Mary Kom" - and much like the movie's poster, she has packed quite a punch in it.

"For you... a sneak peak into the life of a true fighter... bit.ly/MaryKom-Teaser #MaryKomPunch Full trailer coming soon. Can't wait to share it," the National Award winning actress, who received many birthday wishes online, posted on her Twitter page.

Since the morning of her birthday itself, the micro-blogging website was abuzz with posts on a "surprise" that Priyanka had planned for her fans. The teaser for the film. based on Olympic bronze medalist and five-time World Champion M.C. Mary Kom, was unveiled online at 5:30 p.m.

In the 53-second teaser, which is more about sound than visuals, the actress is seen fighting in the boxing ring and she looks totally in character.

The tagline in the teaser reads - "Most Champions Make Their Name. She Made History".

Co-produced by Viacom18 Motion Pictures and Sanjay Leela Bhansali Productions, and directed by Omung Kumar, the inspirational biopic is due to release Oct 2.