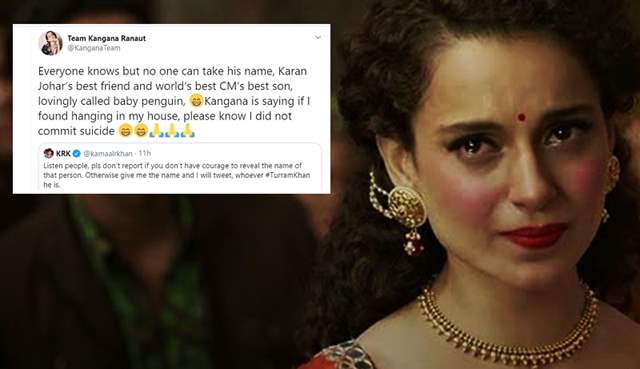 Sushant Singh Rajput's death mystery now taken a new turn, where it has been said that that a big name was present at the actor's party the night before his suicide.

In yet another tweet from Team Kangana Ranaut's team handle, the actress hinting at a political stalwart has said that though everyone knows his name, no one will have the courage to reveal it. But she has been courageous enough to openly take big names and now if she is found hanging at her house everyone should know that it won't be a suicide.

"Everyone knows but no one can take his name, Karan Johar’s best friend and world’s best CM’s best son, lovingly called baby penguin, ??Kangana is saying if I found hanging in my house, please know I did not commit suicide ??????????"

lechuarshi 5 days ago Ooh Aditya tackarey?? So many mystery around SSR's death

LoLo 5 days ago This girl is really nuts! Why are there laughing emojis in this? She is such an attention seeker!

ChickenSoup 6 days ago Can someone please say his name? I’m curious to know who this mystery man is.