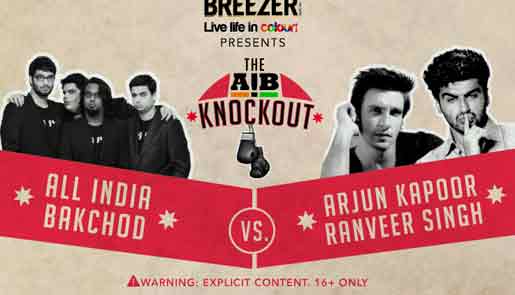 Filmmaker R. Balakrishnan has a "simple" view about the controversy surrounding the popular video of AIB Knockout. He feels these things must not be taken "too seriously".

AIB, or All India Bakchod, is a group of stand-up comedians, who organised a Roast -- an event of insult comedy -- in Mumbai in December 2014. It was a charity comic event where Bollywood filmmaker Karan Johar and a panel of comedians "grilled" actors Ranveer Singh and Arjun Kapoor on their personal and professional lives.

A three-part video of the show went viral after being uploaded on YouTube Jan 28, and ever since, it has courted controversy.

Balki finds nothing wrong in the video.

"In the same way, if you can use a bad word ... as friends, we are using bad words and you (people are) quite okay with that, it's fun," the "Shamitabh" director said at an event here Wednesday.

"They were (the AIB team) having fun, they were not abusing anybody else. I don't think you should take all these thing too seriously because there are too many issues in the country and we should focus on them," he added.

The AIB Knockout clips were pulled down Tuesday by AIB after Maharashtra Education and Culture Minister Vinod Tawde ordered a probe following complaints about the below-the-belt contents of the programme.