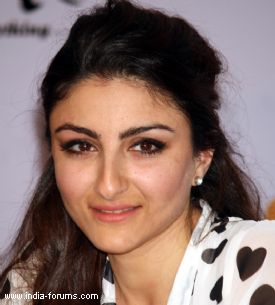 Actress Soha Ali Khan, who is spreading awareness about voting, says if you don't vote, you don't have the right to complain.

As a part of "Hero MTV Rock the Vote" campaign, t-shirts with imagery and text that encourage people to vote were launched here at PUMA store Wednesday and Soha graced the occasion.

"It's a wonderful initiative and I expect highest turnout this year. I think this is the time to make the difference. Today's youth are much more aware of politics and are well educated. I believe we can have a great future as each and every vote counts," Soha told IANS.

"If you don't vote, you don't have the right to complain. So, we as individuals should go ahead and vote," she added.

Soha believes India will have a good system in future.

"I believe we can have a good system in the future. The reason we all are strongly supporting this cause is despite having seen scandals, corruption everything we want to go beyond that we hope for a change and we believe things will change gradually," said the "Rang De Basanti" star.