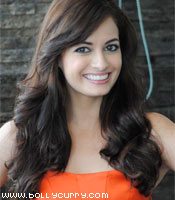 Bollywood actress Dia Mirza has rubbished reports that she has been fined for carrying undeclared items worth Rs.200,000 upon her arrival at the Chhatrapati Shivaji International Airport in Mumbai.

According to a media report, the actress landed at the airport at around 2 a.m. Saturday from Bangkok by a Thai Airways flight, and she was asked to pay a fine of over Rs.100,000.

'For those that are running unverified news about me please be informed that I was not questioned by customs for undeclared jewellery. False,' Dia posted on Twitter.

Last year, actresses like Bipasha Basu and Minissha Lamba were among the celebrities detained at the airport after they were found carrying undeclared goods.