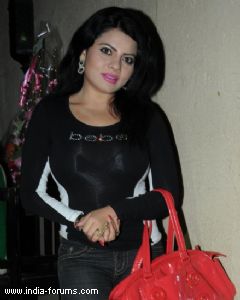 Shraddha Sharma, who participated in the fifth season of 'Bigg Boss 5', feels that everyone in the current season of the reality show is diplomatic and no one ever takes a stand.

"Our 'Bigg Boss' definitely was much better. This time I don't find anyone man enough. Everyone is so diplomatic, be it Armaan Kohli or VJ Andy. No one takes a stand. All of them shift loyalties. Nobody's stand is clear," Shraddha said in an interview here while talking about the contestants in "Bigg Boss Saath 7".

"You must have seen that when I was in 'Bigg Boss', I always had a clear stand despite the fact whether I was nominated or not. But this time all of them change loyalties and don't stand up for their friends," she added.

"Sangram is a good friend and I would like to see him win. Sangram is a simple human being. He is not diplomatic like others. He is closer to me than Payal (Sangram's girlfriend Payal Rohatgi) is to me. I would definitely want him to win," she said.

10 years ago awww, poor SRK but if he lived through the MNIK controversy then if this is true, no one can stop SRK, that's way we call him the King

poornimabh 10 years ago they dnt hav any wrk 2 do excpt 2 disturb sweet srk........
anywaz ryt decision taken....
dnt b affectd by such idle people.

+ 3
10 years ago awwwwwwwwwwwww :(
so that was the reason

+ 4
10 years ago i love SRK so much
i respect his decision
& silly bashers shd shutt their mouth
SRK ROCKS !!!!!

10 years ago those haaters pick on him cos they have the no lifee. srsly just leave him alone !

+ 2
10 years ago aww,coz of some insensitive people we have to miss u on twitter,hope u come back Shah Rukh,havent u seen the lots of love on u there,plz come back for that sake

10 years ago awwww....ii loveedd to see him on twitter :( hope he comes back

10 years ago it happens to all celebs on twitter. haters are sad enuff to stalk n comment on the page of the celeb they "hate"
thats just very sad of them
i wish twitter would ban such ppl!

plz Shah dont feel bad, just block them as blocking them will prevent those sado's commenting on ur page & u can feel comfortable knowing the rest are ur fans supporting u always