Mumbai, Nov 5 (IANS) Though overwhelmed by the response his 'Lage Raho Munnabhai' continues to get, director Raj Kumar Hirani has decided to steer clear of the Munnabhai series, for now. His next will be a 'serious take' on the education system. 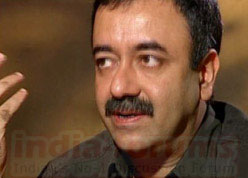 Featured Video
The film, which he starts next year, 'is a serious take on the education system and how it's screwing up the kids', Hirani told IANS.

It will star three young actors - therefore no Sanjay Dutt or Arshad Warsi, the mainstays of both Munnabhai films that were runaway hits.

Hirani says it is time to prove his versatility as a filmmaker.

'I really need to prove myself beyond the (Munnabhai) series. Otherwise, my well-wishers will turn around and ask, 'Can he do anything else?' But, of course, Sanju, Arshad and I have a responsibility to carry forward the series.'

'But 'Lage Raho...' wasn't a sequel. It was an independent film. Thank god, critics saw this as an original script. But I need to get away from these two guys. I must say Sanju and Arshad worked very hard. In 'M.B.B.S.' they had a readymade script to rely on. In 'Lage Raho', the script went through changes right till the end. Sanju's contribution was immense.'

The next Munnabhai film too will be written by Abhijat Joshi and produced by Vinod Chopra. 'Let me be in my comfort zone at least in these areas,' he laughed.

Hirani is delighted by the impact of his 'Lage Raho...'.

'This one really surprised me. A couple were in dispute about buying a flat because according to the expert it wasn't the correct location by the rules of vastu shastra. After seeing the film, the couple decided to give the vastu angle the slip and decided to buy the flat. I don't think the first film had this kind of impact. People are saying 'Lage Raho...' has gone far beyond 'M.B.B.S'.' 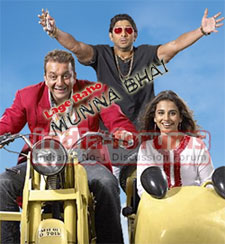 Hirani says he was petrified of writing the 'Lage Raho Munna Bhai' script.

'I wasn't scared of writing 'Munnabhai M.B.B.S.' But writing 'Lage Raho...', where I had to bring in Mahatma Gandhi, was scary. What saved Gandhi-ji and my film from getting stressed was the humour. You know Gandhi-ji was a very humorous man. But still I took a big risk in doing a film where Gandhi was a character.'

Several actors including Naseeruddin Shah were auditioned for Gandhi's role.

'We had spoken to Naseer. He was interested. But he got busy with 'Krrish'. Then there was his own directorial venture. Then we thought of Surendra Rajan who had played Gandhi-ji in Raj Santoshi's 'Legend Of Bhagat Singh'. He had played the sweeper in 'Munnabhai M.B.B.S'. We finally zeroed in on this wonderful theatre and television actor Dilip Prabhavalkar for the role.'

'We sent Dilip's pictures to the guy who had done Ben Kingsley's makeup and he approved. Though Dilip had done his homework, he couldn't get it right on the first day. We then let him be. We told him to stop aping Gandhi-ji, just be himself as the attire was enough to suggest whom he was playing.'

While working on the film, Hirani developed a special respect for Mahatma Gandhi and his ideology.

'I wasn't a huge Gandhian fan before making this film. But I started reading up on him for this film. It required a lot research. That's when I discovered about this amazing man. His simple honest principles are eminently applicable today. Why do we wait for others to change the world? Why can't you or I do it?' 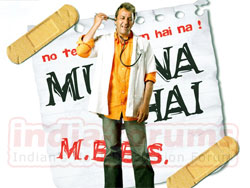 'I don't claim to be anywhere near perfect. But I've strongly started believing in Gandhi-ji's ideology.'

'Take that scene where the man keeps repeatedly spitting outside the neighbour's door and the owner of the house decides to clean the spit repeatedly until the other man is shamed into stopping... that actually happened to my mother-in-law. A neighbour used to throw eggshells in her garden.'

'I'm not offering Gandhism as a full and final solution. But it's better than the complete erosion of ideology in today's society.'

However, in the long run, he says, he might make a Munnabhai film again.

'When I did 'Munnabhai M.B.B.S.' they said comedies don't run. When I did a sequel to 'M.B.B.S' they said sequels don't run. Now they'll say I'm capable of doing sequels only, not serious films. What to do? I'm really not worried about the next Munnabhai film. I already see it in my mind.'