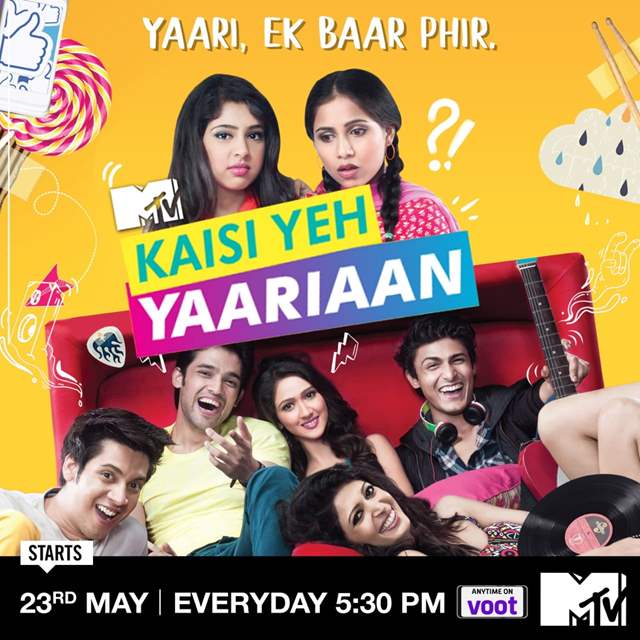 If there is one phase of life that we yearn to go back to, it undeniably is the carefree college days. Be it the fun lectures, joyful events, the stress-free chit-chat sessions with friends, adorable crushes, and bitter-sweet relationships- these resounding memories of college still makes you smile as you go down the memory lane. In 2014, a slice of life series on college with a perfect blend of romance, emotions, laughter, fights etc., became a rage amongst the youth and gave them some of the most relatable characters for life. No points for guessing it right! Our favourite show, Kaisi Yeh Yaariyan is making a grand comeback, starting 23rd May, every day at 5:30 PM only on MTV, Kaisi Yeh Yaariyan will drive away your lockdown blues.

Starring Niti Taylor, Parth Samthaan, Kishwar Merchant, Krissann Baretto, Zain Imam, Ayaz Ahmed, Charlie Chauhan, in pivotal roles, and produced by Vikas Gupta, Kaisi Yeh Yaariyan is about a group of friends, popularly known as the FAB-5 in the S.P.A.C.E academy and captures the drama that unfolds in their lives, while they are getting tangled in the complexity of relationships.

The gorgeous Niti Taylor said, “In this current scenario where the ‘new normal’ has taken over, we’re all missing our loved ones, especially our friends and all the fun catch-up sessions. I believe this is the best time to relive all the old memories and give major throwbacks to all the moments of love and laughter spent with our pals. And what better way than reminiscing those with Kaisi Yeh Yaariyan, a show that beautifully defined the essence of friendship for the youth. This is a great opportunity to go back in time with MTV and stayed glued to all the love and drama on the show. I’m sure the audience is going to be as excited to see the show again as I am.”

As the show returns on MTV, Niti Taylor is super excited and shares with her fans 3 reasons why Kaisi Yeh Yaariyan will make you relive and drool-over your favourite characters, yet again!

And we couldn’t agree more! Parth and Niti’s sizzling chemistry became a huge rage amongst the youth, so much so, that they have been fondly called and addressed as ‘MaNan’ by their fans. Kaisi Yeh Yaariyan oozed out a romance like no other show and had people talking about it across the country. Manik became a universal crush and heartthrob with Kaisi Hai Yaariyaan and Nandini became the unbeatable sweetheart

As the name rightly goes, the show perfectly depicted the various aspects of friendship. The bond between Manik and Dhruv, Nandini and Navya truly gave #FriendshipGoals to all the youngsters out there. In real life too, the entire cast shares a really good bond with each other and continue to recollect good old memories from the show

3. The craze around College bands!

Electrifying college bands have always upped the cool quotient and Kaisi Yeh Yaariyan’s FAB-5 band continues to be all things LIT and Swag! The show reminds of our college bands that have been everyone’s favourite.

Now you know why you can’t afford to miss it this time!

Tune in to MTV, starting 23rd May every day at 5:30 PM and get glued to your TV screens with Kaisi Yeh Yaariyaan.