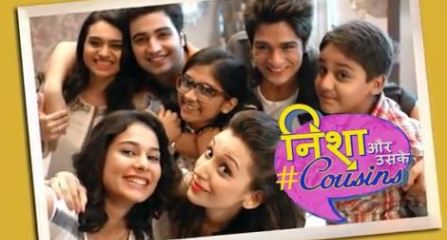 As per what we saw, Nisha is torn between her family and husband.

While Kabir is jailed for stealing jewellery. On the other hand, Nisha's life gets in danger when she is pushed from a heighted construction building while trying to prove Kabir innocent and is rushed to the hospital.

In the coming episodes of the show, Nisha will recover from her injury and will try and convince her family that it is Sumit who has stolen the jewellery and not Kabir.

A source informed, "She will successfully prove Kabir innocent in front of the family. The drama will conclude showcasing Sumit being jailed for committing the robbery and Kabir getting justice for his deeds!"

But how will Nisha prove Sumit a culprit?

We called Aneri Vajani who stated, "That is for us to know and viewers to guess!"

Stay tuned to watch the episode unfold this weekend!

Infinite_Flame 5 years ago Tracks going super awesome :)...NAUC is back with a bang :D...

iheartu 5 years ago Getting frustrated with this Sumit villian track.

Waiting on Nibir confession track. A jealousy track before that would be awesome.

Anagha. 5 years ago waiting for this sumit track to get over
Aneri Vajani and Mishkat Varma rocks as nisha and kabir!

iheartu 5 years ago It has been a while since I enjoyed watching NUAC. Hoping all this stupid jewelry stuff ends soon. Miss the Nibir masti-nok-jhok-fight episodes.

UniquePrincess 5 years ago Wow...Some good moments is going to come.Finally Summit is going out sn.Loved it.I And All NAUC fans r Waiting for NIBIR'S LOVE CONFESSION AND SOME ROMANTIC MOMENTS.Love u MISHKAT MY CUTIE PIE And ANERI AND NIBIR AND NAUC...

sheet_leher 5 years ago I am so waiting for Kabir to be proved innocent...and then finally some cute Nibir moments...
Nibir Rock!! Love them both...

Meet the On-screen Mother of Sana Sayyad in Star Plus' ...
8 minutes ago

Rhea's Lawyer Dismisses Her Being 'Missing' Allegations; ...
16 minutes ago