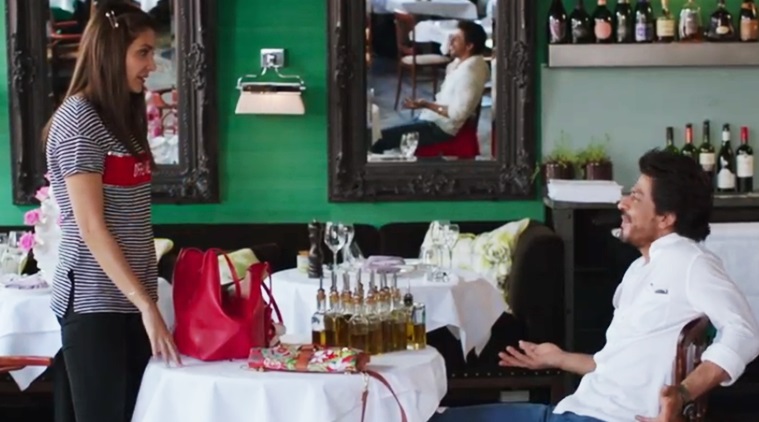 Team 'Jab Harry met Sejal' have released yet another 'mini trail' from the film. This new insight into the film features a cheerful Anushka aka Sejal explaining to Shah Rukh aka Harry the meaning of her name.
Anushka is seen at her Gujarati best as she enacts the meaning of her name to Punjabi Harry.
The mini trail further serves as an insight into the relationship shared by Harry and Sejal in the film.
An innocent Anushka is seen explaining to Shah Rukh Khan aka Harry the meaning of her name while beginning to enact the same as a cue. Unfazed by her efforts, Shah Rukh is seen dismissing her act.
While montages from the film bring to the forefront the talkative, free-spirited side of Anushka aka Sejal, Harry is seen at his outspoken best.
Jab Harry met Sejal's new mini trail further draws the audience into the characters of Harry and Sejal.
Anushka Sharma took to Twitter to present this peppy aspect of Sejal to the audience. She tweeted, "Mera naam hai Sejal! Sejal ka matlab pata hai? @iamsrk @RedChilliesEnt"
To which Shah Rukh Khan replied, "Ma'am! Kitni baar kahoon, mere liye Sejal hi kaafi hai! @AnushkaSharma #JHMSMiniTrail4"
Jab Harry met Sejal is one of the most anticipated films of the year and with these short and spellbinding mini trailers, the curiosity now knows no bounds.
Watch the 4th Mini trailer here:

The first song from the film, 'Radha' has garnered appreciation from all quarters. People now are glued to witness the other songs, of which one song has already got the town talking with the still released by Shah Rukh Khan.
With every mini trailer, the interest of the people is building up even more. Imtiaz Ali's storytelling has always won the hearts of the people and this one too seems to be woven intricately.
Presented by Red Chillies Entertainment, 'Jab Harry Met Sejal' is directed by Imtiaz Ali. The film is all set to release on August 4th 2017.
0 Likes

Mages 3 years ago to be honest...i would prefer RK or RV doing such films than SRK...this film doesn't suit him...