View Profile
After the much awaited and much liked first-look poster of Zindagi Na Milegi Dobara, BollyCurry presents to you yet another released poster, featuring the major star-cast of the movie.
The film is being directed by Zoya Akhtar and is being produced in collaboration with Rit 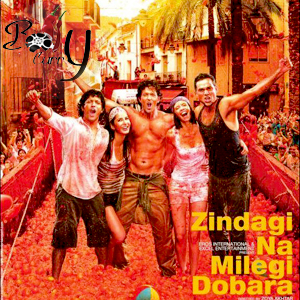 esh Sidhwani and Farhan Akhtar. The movie's key star-cast include: Hrithik Roshan, Abhay Deol, Katrina Kaif, Farhan Akhtar, Naseeruddin Shah and the newly-married, Kalki Koechin.
For the very few who remain unaware over the contents of the first-look, it contained the three leading men posing for it, where Hrithik made all his fan-girls go gaga over his 'shirtless' way. However, in contrast, this poster includes the above said cast - minus Shah - in what seems to be the fun-filled La Tomatina festival in Spain, where portions of the film was shot. For the uninitiated, the famous festival is all about squashing tomatoes!
While all the others veil themselves up, we can help but realise that it's Hrithik who decided to remain shirtless once again. No complaints from us!
To catch the epic fun of Zindagi Na Milegi Dobara, be sure to find yourselves in a theatre on July 15th!

They Kept Denying It But Kriti Sanon Was Dating Sushant ...
12 minutes ago