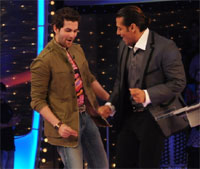 Featured Video
Salman revealed that he has never met the young actor before. But right on the first meeting he liked Neil so much that he declared that he is a pal of thw young lad. Says our source, "Salman took an instant liking to Neil. Their camaraderie was very much like elder brother - younger brother type. Going by Salman's nature who becomes protective of those he loves, it wasn't very surprising to see him taking the big brother's role."


Adds our source, "Salman did not spare Neil from his witty jokes. He asked Neil if the film was actually shot in . Neil replied saying yes, it did get shot there because Yashraj is a production house that will go to any length to bring authenticity to their films. At this point, Salman quipped that Neil is indeed a lucky guy for he had to shoot at Punjab for Dreams!"

Our source further added, "Salman asked Neil to sing one of the songs sung by his grandfather Mukesh. He even made him dance and mimic. Neil for his part amazed everyone by speaking in the voices of Mithun Chakraborty, Sanjeev Kumar and even SRK!" The source further adds, "Even though Salman tried to make Neil comfortable, he seemed to be quite uptight all through the show. It could be because he was in awe of him."

Neil will be partnered by Katrina Kaif and the episode featuring them will be aired this Saturday, the 20th of June on Sony Entertainment Channel.

leharmasti 13 years ago salman is awesome..
srk shud learn how 2 host a show frm salman..
he wil make every1 feel comfertable....
u r so sweet salman......

+ 2
13 years ago Neil is actually very good looking, and I can't wait to see this movie! :) I wished John could've been on this show too! :(