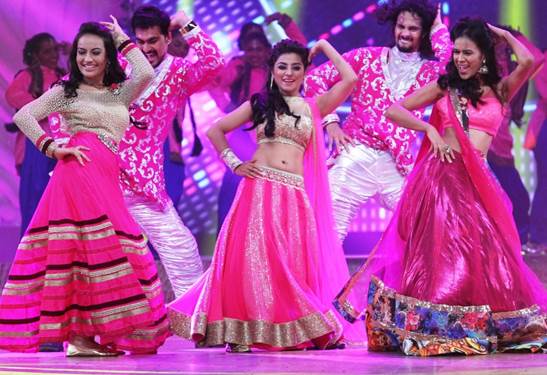 Zee Rishtey Awards is the only platform where you get to see your favorite actors from all the prime time shows of Zee TV come together under one roof and celebrate the relationships they have built amongst themselves and the most special one they cherish - the one they have formed with you - their loyal viewers. ZEE Rishtey Awards 2014 will make its way to your television screens with an explosion of entertainment at 8 PM on Sunday, 14th December this year.

The evening will see some mind-blowing performances from various actors but the one act that stands out, simply because it brings alive the essence of the awards show, is the Rishtey act' that featured television's most favorite bahus, betas, mothers and fathers coming together all at once on stage to shake a leg! Urmi (played by Neha Marda), Roshni (played by Nia Sharma) and Sanam (played by Surbhi Jyoti), looked resplendent in bright pink lehengas as they gave some thumkas to the song 'London Thumakda'. Then entered the mothers Mrs. Khurana (played by Shruti Ulfat), Shashi Rathore (Geeta Tyagi ) and Seema Garg (played by Alka Mogha), who gave the betis tough competition with their well-synchronized Engine Ki Seeti'. But the trio that hands-down stole the show were the fathers Dayal Garg (played by Shakti Singh), Mr Khurana (played by Sanjay Swaraj), Rudra Singh Rathore (played by Jetendra). The audience cheered and rooted for them the moment they stepped on stage and they surely did not disappoint them with their energetic, pulsating performance to Shake it like Shammi'. Then it was the turn of the betas Raj (played by Mishkat Verma), Rihaan (Shehzad Shaikh) Purab (Arijit Taneja) to come on stage n prove their dancing prowess to 'Jee Phad ke'. The act drew to an end with all the betis, betas and their mothers and fathers descending together on stage to dance up a storm to the party anthem of the year 'Party toh banti hai'.  With their well-co-ordinated moves and lively expressions, they had the audience dancing with them every step of the way!

So, be prepared for your television screens to come alive with spectacular performances by the most celebrated talents of the Indian television industry. 6 years ago love Zoya will always be my fav, but you rock also as Sanam n Seher. So talented. Enjoy the week ahead Surbhi Jyoti.

6 years ago Love you Surbhi Jyoti!!!