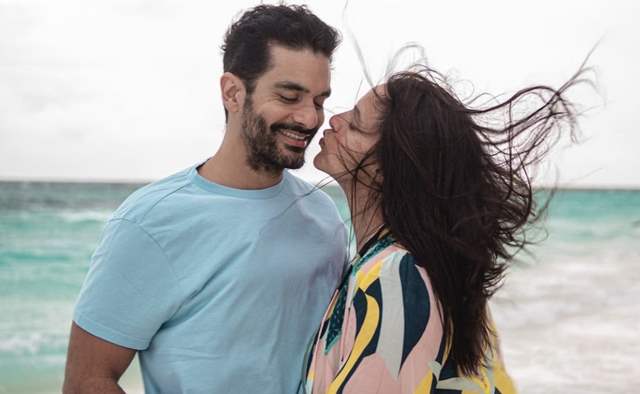 Neha Dhupia and Angad Bedi are one of the most beloved star couples in Bollywood. The couple tied the knot on May 10, 2018. In the same year, the couple gave birth to their daughter Mehr. Another child was born to the couple last year and they named him Guriq.

They have a sizeable fan base and consistently share couple goals on their social media handles. The couple took a romantic vacation to the Maldives a few days ago, and now that Neha has released new photos from their trip, their admirers are in awe.

In the flurry of pictures shared by Neha, she could be seen donning a printed Kaftan with mellow hues like baby pink and yellow. Angad on the other hand was sporting a sky blue plain t-shirt. Sharing the pictures, Neha wrote, "Flying kiss....#islandversion".

Angad Bedi also offered his fans and followers a glimpse at their Maldives vacay. He shared a video wherein he and Neha were seen cycling and engaging in a racing competition with each other.

In the video, Neha looked gorgeous in a white dress and Angad exuded beach vibes with his printed shirt and shorts. Alongside the video he wrote, "With my jhe...lo!!!".

It seems like Maldives have again become the go-to spot for the couples. It was recently that Vicky Kaushal and Katrina jetted to the island with their squad.

Talking about Neha's professional engagements, she was last seen in a short film 'Devi' which also starred Kajol, Shruti Haasan, Neena Kulkarni and others. She was also a part of the Yami Gautam-starring film A Thursday, in which Dhupia played a pregnant police officer. The audience hailed her performance in the film.

+ 8
4 months ago keep happy neha. not sure y ppl troll her so much