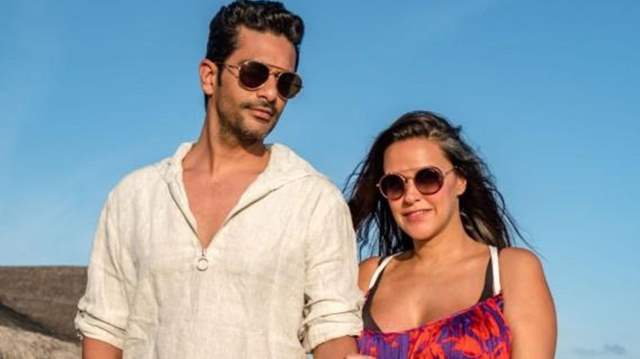 While Angad Bedi and Neha Dhupia are not the typical social media PDA couples, their occasional posts and pictures with each other get fans fawn over their lovely chemistry and love story. The couple, parents to two often share  realationship and family goals.

Today as Neha Dhupia marks her birthday, hubby Angad took to his Instagram handle and penned a lovely and humorous note for her wife.

He shared a monochromatic picture of theirs which was probably clicked during Karan Johar's 50th birthday bash. In the picture Angad is seen hollding Neha from the back as they appear to be dancing on a romantic track while being clicked.

Sharing the picture Angad penned, "Happy birthday my Juicy luicy..🎂 Time to put some loose in that luicy Come back soon we need to spend your money🤣🤣 !!! I love you @nehadhupia 💋💋".

Neha immediately responded to her hubby's note saying, "hank you my love ❤️ @angadbedi also I must say this image has some epic photobombs 🔥😍".

In the background of their charming photo, we can spot Abhishek Bachchan, Maniesh Paul, and other celebrities.

For the unversed, before relocating to Mumbai and attempting her luck in the acting business, actress Neha Dhupia won the Femina Miss India competition in 2002. She made her screen debut a year later in the 2003 movie Qayamat.

Julie, Shootout at Lokhandwala, Chup Chup Ke, De Dana Dan, Tumhari Sulu, Lust Stories, Helicopter Eela, Sanak, and A Thursday are just a few of the movies in which Neha appeared. She got married to actor Angad Bedi in 2018. The couple was  blessed with a boy named Guriq and a daughter named Mehr.