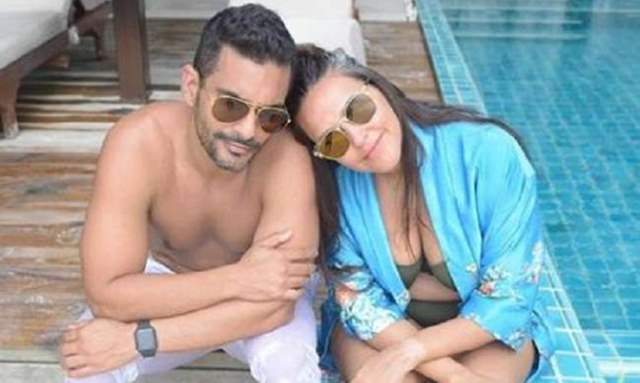 Love couple Neha Dhupia and Angad Bedi recently rang in the former’s birthday vacationing by the beach, in the Maldives. The duo shared many pictures soaked in love and happiness from their fun-filled romantic trip. The two actors got married in a hush-hush ceremony in May last year and after 6 months into the marriage became proud parents to their little angel Mehr. However, nor did the pregnancy or the delivery of the baby stop Neha from getting back to her work and she even started working towards her physical transformation.

We all know that the privilege of motherhood also comes with a few crunches including bodily changes and it was the same for Neha as well. However, she was fat-shamed on social media and mean comments targeted the actress all over. While Neha did not pay any heed to the brutal trolls, hubby Angad Bedi has come to her rescue and has hit back to all the trolls.

“We all know the process… a woman who is expecting goes through a lot of bodily changes. In fact, during the postpartum period, many mothers don’t feel attached towards her new born. So during such times they are quite sensitive and require special care. Still there are people who don’t think twice before making hurtful comments about how a mother looks. I fail to understand what satisfaction they get out of body shaming others,” says Angad.

Angad backs wifey Neha and comes in support of her saying, “But it takes time [to get back in shape]. She can’t compromise on her health more so when she is also breastfeeding... Those who fat shame I want to tell them being happy has nothing to do with body weight but how one leads his or her life. Neha is a strong woman; she has got back to work and is also taking care of her child. Women like her should be celebrated….”

Recently, Neha had started the “Freedom to Feed” initiative and shared an intimate video breastfeeding her daughter Mehr, in order to raise awareness about this rarely spoken subject. The thoughtful initiative garnered a lot of consideration and support online and many celebrity mothers backed the same by posting their videos on social media.

The 39-year-old actress has been successfully juggling her work along with motherhood and is truly a Boss Lady. More power to you, Mommy Bedi!