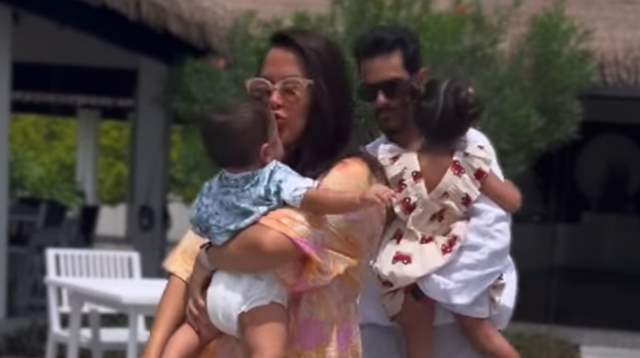 Bollywood actress Neha Dhupia is currently holidaying on celeb's favourite island the Maldives. B-townies often visit the location to relax with their friends and families. The actress checked into the island a few days ago and since then has actively been posting pictures from her vacation.

Angad Bedi took to his social media account and posted a video of himself as he slayed some amazing dance moves with his wife Neha and their kids Mehr and Guriq.

Sharing the video on his Instagram he wrote, "Part 2 better than part 1"

The actor referred 'Part 1' to the previous dance post shared by Neha on Instagram. In the video, the Sanak actress can be seen donning a colourful flower print Kaftan dress along with pink sunglasses and carrying her son Guriq while Angad wore a white shirt and grey pants matching Neha's moves as he carried their baby girl Mehr.

Previously the duo had also shared fun pictures of themselves enjoying their pool time. Well, needless to say, this video of Neha and Angad has left us craving for a vacation too.

For the unversed Neha married Angad Bedi at a private ceremony in New Delhi in 2018. The couple welcomed their daughter Mehr in the same year. The couple also welcomed a baby boy last year and they have named him Guriq.

On the work front, Neha Dhupia was last seen in Yami Gautam's starrer 'A Thursday', in which she aced the role of a cop. It is noteworthy that the actress was pregnant in real during the film's shoot. The film received quite a positive feedback from the audience.