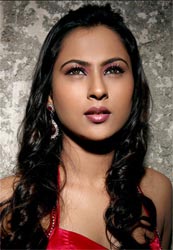 Neha Desai who will soon be entering COLORS' Aise Karo Naa Vidaa is happy that she has got a role which is young in age.

As reported earlier by Telly Buzz, Neha will play the sister of Yashvardhan (Anas Rashid) and Aryaman (Rohit Purohit) in the show.

Talking about her role, Neha says, "I have played every role in Woh Rehne Waali Mehlon Ki starting from a kothewali, to a wife, widow, mother and a keep. It feels really nice to be playing a young girl who is aged about 19 or 20. My character name is Jyotika; she is the laadli daughter and is very close to her brothers. She is very bubbly, positive and comes home for her brother's marriage. She had been studying somewhere abroad".

Neha took up the role for another reason. "Well, I was free for 15 days in a month, and for me, shooting means life. So when I came across a role that was full of life, I took it up".

Talking about her track in Woh Rehne Waali, Neha tells us, "Rani and the entire family has now got to know that Payal has not married the guy, and is just his keep. They have thrown her out of the house. But Payal's intentions have always been good, as she sacrificed her life for the betterment of her family. So we will soon proceed to the track wherein Rani will eventually get me into the house".

Coming back to Aise Karo Naa Vidaa, Neha Desai has started shoot for the show and her entry will be aired very soon. Jyotika will probably be shown to be the love interest of Sharad (Mohit Daga), brother of Reva (Aastha Chaudhary), as the story unfolds.

anasrashid_fan 10 years ago best luck to her....i had predicted this only..that she will b sharad's love....after watching today's precap!