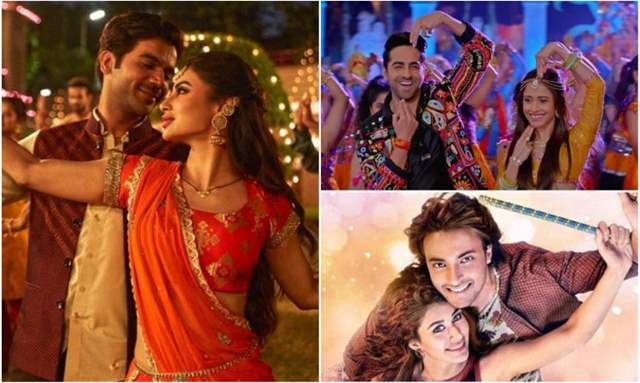 It’s time for some good vibes as the pious nine days of Navratri have already commenced, that spill only lights, colors and music everywhere. The whole nation celebrates this nine-day festival where nine avatars of Goddess Durga are worshipped and people all over the country gear up to groove and flaunt their Garba skills.

Bollywood makes up for a huge factor of Entertainment in the country and leaves no stone unturned in delivering movies and music that will only add to your festive feeling. Many iconic songs from Bollywood movies have come to become, what can be called the Navratri Anthems, as people love to groove to the peppy numbers. So, get your dancing shoes ready and pick up your pair of Dhandiya’s as we bring to you a list of chartbuster songs from Bollywood that will get you Garba Grooving :

Talking of the latest track first, Odhani, from Rajkummar Rao-Mouni Roy’s upcoming film Made in China. Sung by Neha Kakkar and Darshan Raval, the song is recreated by Sachin-Jigar and lyrics are penned down by Niren Bhatt and Jigar Saraiya. The song makes up for a catchy track and will leave you humming the lyrics for a long long time.

Coming from the same movie as mentioned above, the song Sanedo is second on our list. While this song is already popular amongst people as it lists as a Gujarati folk music, popularized by well-known Gujarati singer Maniraj Barot, this rendition of the song will also leave you grooving. Again, the song is picturized on the lead cast of the film, Rajkummar, and Mouni.

The Ayushmann Khurrana-Nushrat Bharucha starrer gifted us with this catch and crazy song Radhe Radhe. Sung by Meet Bros, featuring Amit Gupta and lyrics penned by Kummar, this song will set your Navratri mood just right.

When talking of Navratri and Garba, how can we miss Loveyatri, which marked the debut of Aayush Sharma and Warina Hussain. The romantic drama movie celebrated the festive vibe well, and the song Chogada is bound to get played at each and every corner of the country throughout these nine days.  Sung and written by Darshan Raval featuring Asees Kaur on female vocals, this song is an ultimate crowd favorite.

One more superhit and captivating number from the movie Loveyatri, that revolves around the festival of Navratri, Dholida is next on our list. With the perfect festive frolic music and the splendid Garba touch to it, the song will make it difficult for you to control your moves. With colorful backgrounds and festive outfits shining in the song, the track gives you all the right vibes.

Well, this chartbuster Garba song from the on-screen duo - turned real-life couple, Ranveer Singh and Deepika Padukone starrer Goliyon Ki Raasleela Ram-Leela is a list topper. Sung in the beautiful voice of Shreya Ghoshal & Osman Mir, the song has all Gujarati elements to it. With the leading duo dressed in a festive avatar and the entire setting of the song built around colors, the music video of the song is a treat to the eyes.

Standing true to the old saying, Old is Gold, this song from Salman Khan-Aishwarya Rai Bachchan’s 1999 film,  Hum Dil De Chuke Sanam, is an iconic Garba number. Over the years, the song has been played in and out during every Navratri event and celebration as the lyrics, music, background, everything about the song inches closer to perfection. Sung by Kavita Krishnamurthy, Vinod Rathod, and Karsan Sargathia and composed by Ismail Darbar, the song remains etched in our hearts even today and does not fail to make our Garba evenings special ever.

Which is your all-time favorite Garba Song? Let us know in the comments below...